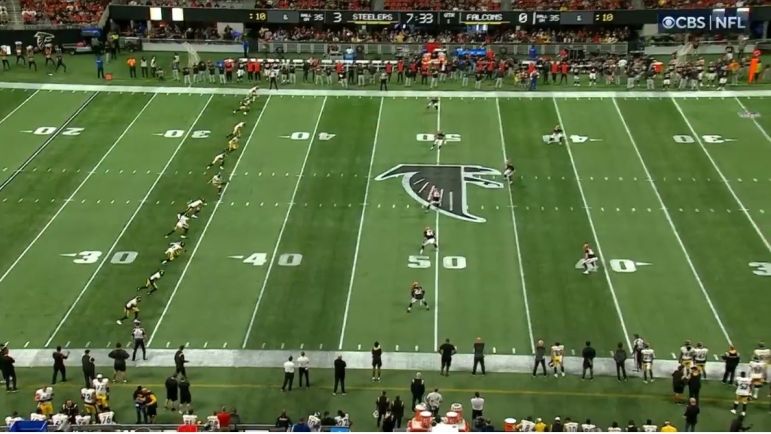 Monday night against the Indianapolis Colts, the Pittsburgh Steelers’ special teams weren’t that special. Six days later, they had one of their best games of the year against the Atlanta Falcons.

The best stat of the team’s 19-13 win was zero. That’s the number of times Atlanta’s Cordarrelle Patterson touched the ball on kickoffs yesterday. The NFL’s all-time leader in kick return touchdowns with nine, his last coming earlier this season, Pittsburgh smartly played keep away from him throughout.

“Very proud,” he said via The Trib’s Chris Adamski. “We played well on special teams this game. Obviously was not our best game against the Colts. We came out there, had a plan and executed this game against the Falcons. Just so proud of our guys and have to build off it.”

Derek Watt on the bounce back for the Steelers special teams unit Sunday pic.twitter.com/ub6sqDUtzM

Pittsburgh’s plan was simple. Don’t kick it to Patterson. Instead of traditional-looking kickoffs, the Steelers used pooch kicks, short, high-arching boots from Matthew Wright. Here’s a couple of examples.

The few returns the Falcons had barely made it to the 25-yard line while others landed in the end zone for touchbacks. In total, Pittsburgh won the field position battle, a key to winning this game. In addition to Wright’s kickoffs, punter Pressley Harvin III had one of the best punts of his career. With time running out in the fourth quarter and the Steelers leading 19-16, Harvin placed a punt at the two-yard line. One play later, Minkah Fitzpatrick sealed the game with an interception.

Elsewhere, Wright went a perfect 4/4 on field goals including hitting three of them from 46+ yards out. The unit wasn’t perfect, return man Steven Sims was shaky on punts, but the overall performance was miles better than it was a week ago.

For Watt, he continues to be a core special teamer while seeing an increased offensive role, picking up key first downs in third-and-short situations. While his overall snap count on offense is low, especially relative to his contact, Watt was signed as a special teamer and Tyler Matakevich replacement more than he was a fullback. He and the Steelers’ special teams units will have to be strong again versus the Ravens. Those games are always close and Baltimore always has strong specialists so winning that battle will be important.