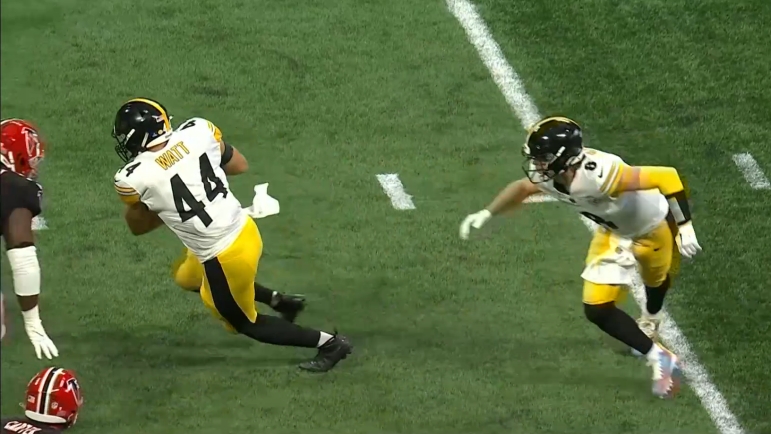 The fullback dive is undefeated. Or, at least this year it is. Nearing a career-high in carries, Pittsburgh Steelers veteran fullback Derek Watt has so far gone a perfect 5-for-5 in rushing attempts on the season, all on 3rd and 1, all picking up at least two yards.

His most recent success came on Sunday against the Atlanta Falcons, popping free for a four-yard effort on the third play of the game, in fact. It was the second time in as many weeks he picked up four yards on a 3rd and 1, doing so against the Indianapolis Colts last Monday.

“It definitely feels good to get involved,” he told Chris Adamski yesterday for the Pittsburgh Tribune-Review. “Obviously we are continuing to have some success with it, so that’s bringing out some more opportunities. Whatever I get, I try to make the most of it.”

Signed to a three-year contract worth nearly $10 million back in 2022, Watt instantly became one of the highest-paid fullbacks in the league, though in actuality he was paid to play on special teams (and he had a special teams tackle on the kickoff following the Steelers’ opening drive in Atlanta as well).

It’s led to all kinds of fun theories, particularly the accusation that the Steelers signed him to appease his younger brother, T.J. Watt, and perhaps even to help coax him into signing what was at the time a record-breaking contract, the largest ever given to a defensive player with the most guaranteed, completely departing from organizational contract norms by guaranteeing the first three years of the deal.

For his part, Derek Watt actually had the opportunity to comment on the outside chatter about his contract. “That’s not my problem to deal with,” he told the Pittsburgh Post-Gazette last month when asked about people thinking he’s overpaid for what he does. Of course, he can only do what the coaches let him do, and they haven’t let him play on offense all too much over the past three years. But perhaps this recent third-down niche will help that.

“It feels good,” he said, to contribute and be trusted on third down. “Those are possessions. It creates another fresh set of downs for the offense and hopefully put a full drive together after that. The one last game was the first drive of the game, and we put a really long drive together.”

Pittsburgh has actually been very good on 3rd and 4th and 1 this year, not just with Watt but also with running back Jaylen Warren and quarterback Kenny Pickett, who’s put the quarterback sneak back on the menu in spectacular fashion. They have an 88% success rate in those situations, which is the best in the league according to Pro Football Reference (not Pro Football Focus, they’re different), with 22 first downs on 25 3rd- or 4th-and-1 offensive plays.

Watt has five of them. Pickett has six. Both Najee Harris and Warren have two, and Benny Snell Jr., Diontae Johnson, and George Pickens each have one as well. Actually, technically, Watt has six, as his touchdown pass was caught on 3rd and goal from the 1. And Pat Freiermuth has two through the air as well.