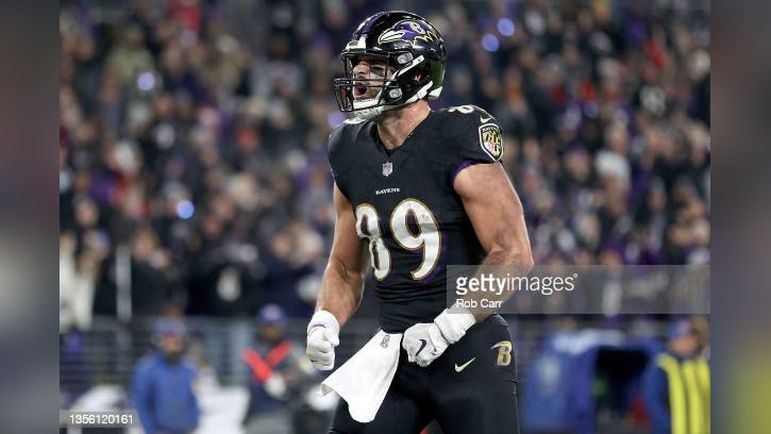 Despite it looking increasingly more unlikely that Baltimore Ravens quarterback Lamar Jackson will suit up on Sunday, the Pittsburgh Steelers will still have their hands full with superstar tight end Mark Andrews.
Andrews is one of the best tight ends in the league and leads the Ravens in receiving yards and targets.

Speaking to the media today via Steelers.com, linebacker T.J. Watt addressed the threat that Andrews poses.

“He’s definitely a top tight end in the league. I think he’s done a great job” Watt said of Andrews. “We see him twice a year and we’re no stranger to the things that he does. They use him as a top receiver at times, obviously can block, but he’s more of a primary target guy and he’s a very good combat catcher and he’s a good yard-set-to-catch guy as well.”

Watt, the defending Defensive Player of The Year, knows how important is is to contain Andrews in this matchup. Not only is he the number one receiver in the Ravens offense, but also he can function as a check down receiver if the outside wide receivers fail to get open. This makes him dangerous on every single play and why he has been able to rack up so many yards and catches.

Andrews is a Travis Kelce caliber tight end, and over the years Pittsburgh has struggled to contain tight ends like that. Everyone knows how Rob Gronkowski abused the Steelers in his time as a New England Patriot, and the Steelers need to make sure Andrews does not do that to them.

While Andrews has never had monster games like Gronkowski has had against Pittsburgh, in their last meeting Andrews put up his best numbers to date in the rivalry with Tyler Huntley at quarterback for Baltimore. In the Week 18 matchup last season, Andrews was targeted 15 times which resulted in eight receptions for 85 yards. Although Andrews has yet to score a touchdown against the Steelers, if the Ravens are able to break their four game losing streak he will be a big part of it. On the year, Andrews is the team’s top target with 56 receptions for 654 yards and five touchdowns.

Steelers safety Terrell Edmunds will likely draw the difficult assignment of guarding Andrews, as he is normally tasked to covering top tight ends. A few weeks ago, Indianapolis Colts tight end Jelani Woods had a big week against the Steelers, recording eight receptions for 98 yards, so it will be critical for the Steelers not to let Andrews get open like Woods did or the game on Sunday could go very poorly for Pittsburgh.

If Pittsburgh wins on Sunday, it will certainly be because they contained Andrews. They Steelers have done a good job so far in the rivalry, but they will have to continue that if they want to keep their playoff hopes alive.