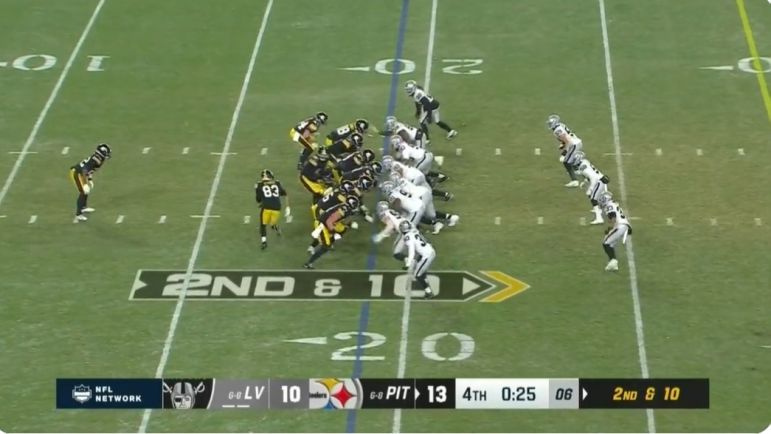 Connor Heyward may only be a rookie but you don’t need to be a grizzled veteran to know the strides the Pittsburgh Steelers are making. Now just one-game under .500 and 5-2 since their bye week, the Steelers are legitimately back in the playoff conversation even if they’re still very much on the outside-looking-in. Speaking to reporters Monday as shared by The Trib’s Chris Adamski, Heyward likes not only where the team is at but where they’re headed.

“I feel like we’re coming in with the right mindset,” Heyward said. “Getting better each week. Trying to go 1-0. Trying to control what we can control.”

Connor Heyward on the improvement of the Steelers offense in recent weeks pic.twitter.com/fQHkPMZ5qH

Growing up in a football family, Heyward has the “player-speak” down pat. But he’s accurate in what he’s saying. While the Steelers offense has still slogged their way through the season and until their next-to-last drive Saturday night, dealt with the same-old problems, this team has found ways to win close games as opposed to losing them.

Since Week 10, the Steelers are 4-2 in games decided by one-possession as opposed to the first half of the year when they went 2-3 (and really, 2-4 if you include their loss to the Cleveland Browns). For Heyward’s part, he’s played niche but important roles for the Steelers in securing victory. Against the Raiders, he finished the win on this TE sweep for 21 yards and the final first down.

A former RB at Michigan State until being forced to move for Kenneth Walker, now starring in Seattle, it was Heyward’s first NFL carry. But it wasn’t Heyward’s only notable play. He’s improved as a run blocker and the team has gotten smarter with how they deploy him, using him to cut block on split-flow action as opposed to earlier in the year when he was staying on his feet and being overwhelmed by bigger defensive ends.

Like here on this 14 yard run by Najee Harris, his longest of the game.

Heyward’s also earned his role on special teams and contributed with a solo tackle on the opening kickoff of the game, though he missed one later on in the day. While he isn’t a starter and lacks a high ceiling, Heyward will continue to carve out bit-roles throughout this team. Blocking, catching, running, and playing on special teams. He’s been a useful player to have as the team’s #3 tight end and offers a unique flavor to the group. Pat Freiermuth is more of the “traditional” tight end, Zach Gentry is the blocker, and Heyward is the H-Back who wears lots of hats.

While the Steelers are likely to turn their roster over in the offseason, the tight end room should be one of the few positions that doesn’t have change. Gentry is a free agent and his return isn’t guaranteed but odds seem to be better than 50% the team will re-sign him on a fairly cheap deal. Gentry’s developed his game in Pittsburgh, has a good coach in Alfredo Roberts, and is very close to Freiermuth.

For the here and now, Heyward and the Steelers will maximize the last two weeks. They enter Week 17 with something to play for though they can be eliminated before even kicking off against the Baltimore Ravens. Still, the fact they’re mathematically alive after such a dreadful start, bottoming out to 3-7 five weeks ago, is impressive and something Heyward and the rest of this team can build upon heading into the new year.