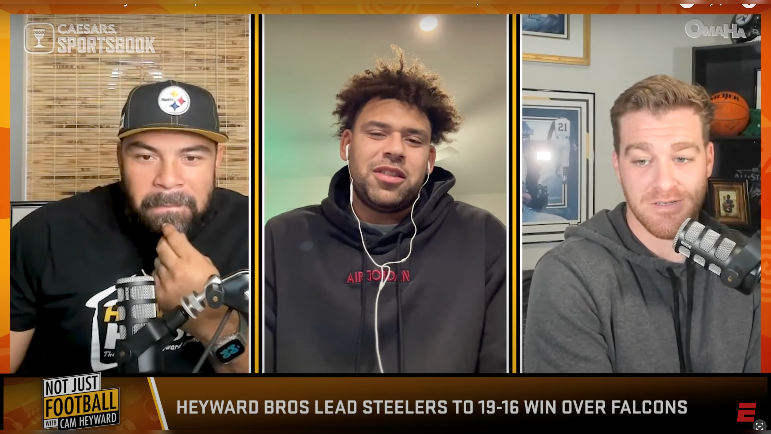 It was quite the moment Sunday inside the Mercedes-Benz Dome against the Atlanta Falcons for rookie tight end Connor Heyward and Pittsburgh Steelers team captain Cameron Heyward.

Following a sack on the previous Falcons drive by Heyward that helped hold Atlanta to a field goal, the Steelers responded quickly on offense with a touchdown drive, capped off by Connor Heyward catching a wide-open throw from rookie quarterback Kenny Pickett off of a Y nod route.

The touchdown was the first of Heyward’s career, but it was all the more special considering he was back home in Atlanta playing against the team his late father, Craig “Ironhead” Heyward, played for.

Appearing on the Not Just Football Podcast w/ Cam Heyward Wednesday, Connor Heyward described the moments leading up to the catch and what it was like afterwards when the weight of the moment finally hit him.

“It was super awesome. So Pat [Freiermuth] had the nice catch and long run and then next play they subbed me in. He needed a little breather and then the play…it got like blown dead. I didn’t know if it was on us or something, but it was blown dead or whatever. Might have been on them. And then Coach Fredo [Alfredo Roberts] still kept me in,” Heyward said, according to video via the NFL on ESPN YouTube page. “And then…we went empty I think on the play. I was the number three receiver on the inside and there was a two-safety look. And when that happens, I have to split the safeties.

“The safety kind of had me in a man look it almost looked like. He bit on the out part, and after that, it was Kenny throwing me the ball and he put the ball in the money.”

Cam Heyward said he got choked up when Connor Heyward scored his first career TD against Falcons in their hometown of Atlanta. Cam added the two got up early this AM to visit their father’s grave.🙏

“God and my dad are always working together.” #Steelerspic.twitter.com/x3yZEpt1vN

Per usual, Connor Heyward is pretty reserved overall in public and doesn’t let his emotions fully come out, which caused some ribbing from Cameron Heyward.

On his first career touchdown, Heyward ran a Y nod route from the detached tight end alignment and did a great job splitting the safeties with the nod route, finding himself wide open in the back of the end zone. Pickett threw a perfect pass to his fellow rookie and it ended up in six points.

Right away on the route, Connor knew he won the rep and was open.

“Yeah, once I came out of the out part of the route, I kind of knew that if he throws me the ball, I was going to score. And luckily he did,” Heyward said according to video via the NFL on ESPN YouTube page. “Hopefully he does that for many more times to come.”

Seeing his younger brother score his first career touchdown in the NFL back home on an emotional day caused older brother Cameron Heyward to get emotional just a few hours after the brothers visited their late father’s grave in Atlanta.

“Okay, so I’ll be honest, like when it happened, so the series before I had gotten a sack and then the next series they went out and he had gotten a touchdown and like, man, it hit me and I was not ready for that moment,” Heyward stated. “I’m glad there was no cameras. Coach T had to come up to me and was just like, ‘man, get it together. He’s a Steeler. Stop making him your brother.’ And, like was I was messed up. I had to like put the helmet over my face. Like I was like, ‘please do not look at me right now.’

“I made sure there was no camera next to me, so, but it was a really cool moment.”

It was a very cool moment, one that will be remembered forever, not only for the Heyward family overall, but for Steelers Nation as well. Sports has a funny way of causing special moments to happen, and that’s exactly what football did on Sunday inside Mercedes-Benz Stadium.

If anybody wants to know why I love the Pittsburgh Steelers, just watch this video. 😭 pic.twitter.com/2b6eF42wKx