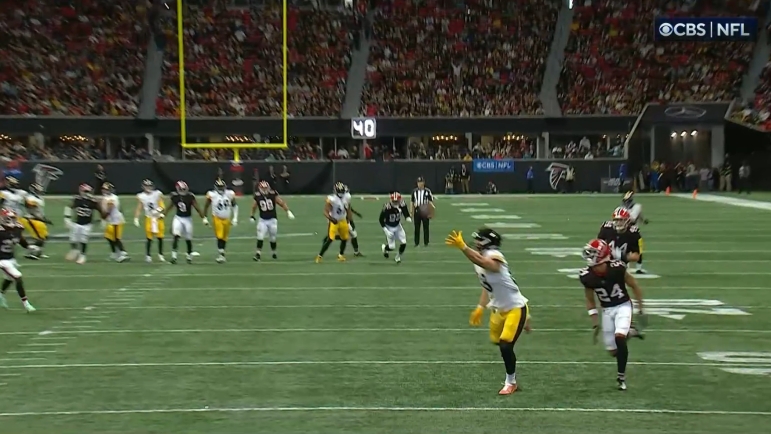 For the fourth straight week since a season-changing bye, the Pittsburgh Steelers offense looked pretty darn solid under the direction of rookie quarterback Kenny Pickett.

The offenses Strong play continued on Sunday inside Mercedes-Benz Stadium in a 19-16 win over the Atlanta Falcons as the Steelers racked up 351 yards of total offense on 65 plays and possessed the football for 32 minutes and 55 seconds in the win.

The Steelers rushed for 154 yards in the win and threw for 197 yards in a well-balanced offensive attack that earned praise from Pickett post-game.

However, while the Steelers put together some solid drives throughout the game, they consistently stalled in and around the end zone, settling for four field goal attempts on the afternoon. While kicker Matthew Wright drilled all four field goals, Pickett was rather frustrated with the offense’s inability to finish drives with touchdowns.

“We just had some penalties that we gotta clean up. Really just hurting ourselves. They were probably the biggest thing that stuck out that we needed to continue to improve on, and finishing in the red zone,” Pickett stated to reporters after the win regarding his assessment of the offense, according to video via the Steelers YouTube page. “We had some great opportunities, moving the ball really well. Run game was awesome. I thought our balance was really good.”

“But it’s just that finishing piece where this game could have been put away a lot sooner.”

Slowly but surely, the Steelers offense is finding its groove. They are much more balanced since the bye week and are running the football at a productive clip overall, averaging 161 yards per game on the ground since the bye week. They happen to be 3-1 in that stretch.

On such a young offense, progress needs to be steady, and that’s what the offense has done in the last month or so. They’ve cleaned up some of the execution issues between the 20s. Now, they have to figure out how to consistently finish in the red zone. It’s hard to score touchdowns in the NFL but doing so at a better clip than what they are currently (1-for-3 on Sunday) will go a long way towards winning more football games.

“I mean, that’s just what we’re missing right now, is being consistent with touchdowns in the red zone,” Pickett added, via the Steelers YouTube page. “That’s something that we’re continuing to work at. We’ve been working at it. We’re close, but close can get you a loss in this kind of game. So, we gotta figure that out this week.”

When it comes to the red zone and the fringe areas of the red zone, it comes down to overall execution, like Pickett misfiring to Pat Freiermuth up the seam and then Diontae Johnson dropping a wide open third down pass, or an illegal touching penalty on Steven Sims on a great catch in which he converted a 3rd and 7 with a toe-tapping sideline grab.