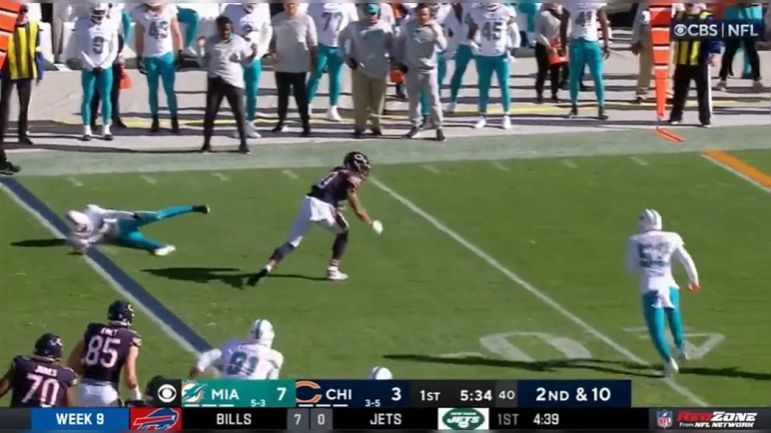 It’s a good thing that the value of the Pittsburgh Steelers’ second-round draft pick they are getting from trading former wide receiver Chase Claypool to the Chicago Bears has nothing to do with his performance or production. Or his understanding of their offense. Because he’s apparently still playing catch-up several weeks into the trade.

A 2020 second-round pick, Claypool is in his third season in the league. He moved into the slot this season and had not fully adjusted to it, pretty much admitting as much in his first comments after the trade, hoping that he can find more success back outside.

That hasn’t really come. He has 12 catches on 22 targets in five games since joining the Bears for all of 111 receiving yards. He has one rushing attempt, and he has lost a fumble as well. According to Pro Football Reference, three of his 10 incompletions have been drops, and his average depth of target with the Bears has been even shallower.

“I wouldn’t say he’s there yet,” Bears head coach Matt Eberflus told reporters this week regarding Claypool’s grasp of his offense, Chicago coming fresh out of a bye, via Alex Shapiro of NBC Sports. “I would say he’s getting there. He’s getting there and working there just like everybody else. But again, it’s all new to him and there’s a lot of volume of offense that he has to learn and he’s getting there.”

Now, it would be disingenuous not to acknowledge that there are difficulties in picking up a new system midway through the year, especially if you’re a young player who’s only known one before—and if that system is Matt Canada’s to boot.

The point actually isn’t to rag on the former Steeler and bask in the schadenfreude of his not doing particularly well out of the gate in his new home, laughing all the way to the bank with what looks to be a high second-round pick for dumping him.

We’ve known since he was drafted that Claypool is a talented and capable player, but has he ever managed to put all the pieces together consistently for any sizeable duration? Not particularly. Could he approach that at some point in the future with Chicago? I would like to think he can.

“He needs alignment, assignment and get all the things down, the route depths and the routes, the discipline of running the routes,” Eberflus said of where his theoretical number one receiver needs to continue to work. “He’s in a good spot. He’s in a good spot. We’re looking forward for him to get better every single week.”

With Claypool out of the picture for Pittsburgh, they now have Diontae Johnson and rookies George Pickens and Calvin Austin III, the latter having spent the year on the Reserve/Injured List, under contract for at least the next two seasons. Still, it feels like a group they’ll need to add to in the offseason. Steven Sims and Gunner Olszewski aren’t cutting it.