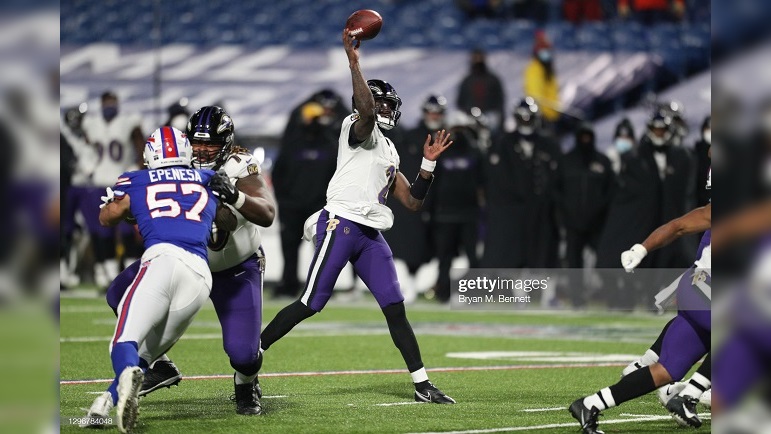 Despite not being on the Pittsburgh Steelers last season, cornerback Levi Wallace is familiar with facing off against Baltimore Ravens backup quarterback Tyler Huntley. With their normal starter, Lamar Jackson, likely sidelined this weekend due to injury, Huntley is expected to start.

The Steelers faced Huntley in Week 18 last season and got a win, but Wallace, their new cornerback signing, saw him in the 2020 AFC Divisional Round playoff game and knows what Huntley is capable of.

“He’s just kind of like Lamar [Jackson]” Wallace said, according to a Wednesday interview on steelers.com. “He’s a good runner and a really good passer as well. I think they tend to stretch out a little bit more on offense and just looking at the film last year I think the Steelers played him here too. He’s a really good player and so we have to have a lot of respect for him because he can do both, just like Lamar.”

Huntley is one of the better backup quarterbacks in the leagues; despite not winning much when he is playing, he often gives the Ravens a chance, and that is normally all you can ask for out of a backup quarterback.

In Wallace’s meeting against Huntley, the Ravens quarterback tried to mount a fourth quarter comeback to advance the Ravens to the AFC Championship Game but came up short. Huntley drove the Ravens down to the Bills’ ten yard line at one point, but down multiple scores they came up empty trying to score a touchdown. Huntley threw for 60 yards, going 6/13 and posting a passer rating of 59.8 in that game.

Huntley has improved since that performance when he was thrown into a playoff game his rookie year, and Wallace and the Steelers defense have to be prepared for that. Last weekend, Huntley stepped in admiralty for Baltimore as Jackson came off injured, leading a game winning drive with just seconds remaining. While Huntley and the Ravens offense couldn’t get much going most of the game, when it mattered he delivered.

Wallace and the Steelers familiarity with Huntley and the fact he plays similarly to Jackson works in their favor. Pittsburgh has been one of the very few teams to be able to keep a lid on the electric Jackson. However, Jackson is a very unique quarterback due to his skillset, leading to the Baltimore offense rightfully tailored around his skill sets. The Ravens run a lot of QB options and run pass options, and with Huntley in there not much will change. The Ravens wanted a backup quarterback who they would not have to change much up for if Jackson ever had to miss a game.

This means the Steelers won’t have to change up much of their already successful defensive scheme against the Ravens. Just because Jackson is not playing does not mean they can take Huntley lightly. While he is not as good as Jackson, Huntley has and can still execute their gameplan. Pittsburgh has to be on their P’s and Q’s Sunday to extend their win streak against Baltimore to five games and keep their slim playoff hopes alive.