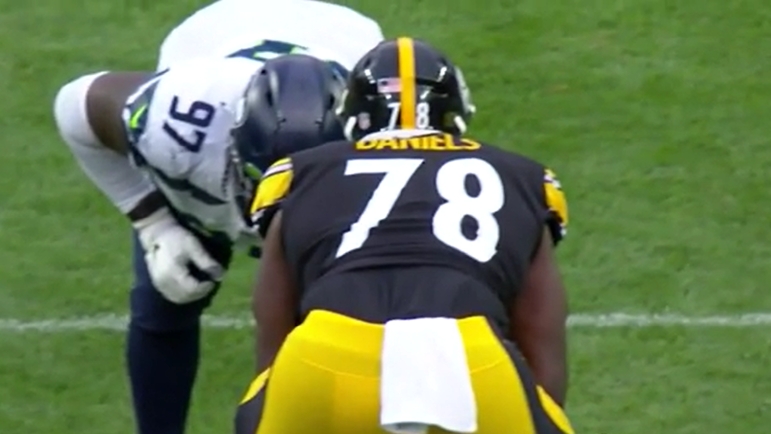 With the coordinators scheduled to speak to the media today, Pittsburgh Steelers OC Matt Canada took questions regarding individual player performances and the status of several of his starter in lead up to Pittsburgh’s Week 15 matchup on the road against the Carolina Panthers.

When Canada was asked about RG James Daniels and what he has brought to the offensive line since signing with Pittsburgh this past spring, Canada commended is starting right guard for being a knowledgeable football player that leads by example both on and off the field.

“I think James is a really good leader,” Canada said about Daniels per official team transcript. “He’s a really, really smart guy. He’s a guy that asks a lot of questions when you install things and likes to be involved, which I think is really good for any player.

You look at what he’s brought and what Mason [Cole] has brought, those two guys who are older players who’ve played more football, and when the younger guys hear them asking questions, it’s just for their knowledge. Why are we doing this? What’s going on here? So, they understand kind of the structure of the defense, what’s going to happen. So, obviously, his play is his play, but I think what he adds off the field has been a real bonus for us.”

Canada was quick to include C Mason Cole into his praise for Daniels, recognizing both as experienced veteran offensive linemen that the Steelers signed in March to help bolster the trench play on offense. Despite shaky play from Daniels to start the year and growing pains from a new starting five upfront, the offensive line has gelled more in recent weeks, become a force particularly in the running game.

Pittsburgh has averaged 142 rushing yards per game since their bye week thanks to the improved play by the offensive line. As Canada points out above, it’s no coincidence as James Daniels has continued to be a student of the game ever since he arrived in Pittsburgh by constantly asking questions and prioritizing learning the system and honing his technique to become a better player and improve the play of the unit as a whole.

Daniels currently boasts a respectable 68.0 overall grade according to Pro Football Focus with Cole sitting at a 66.8 overall grade. While not outstanding, both Cole and Daniels have done their part to stabilize a shaky OL with the leadership and play they bring to the table every week. Barring some unforeseen changes, we can likely expect Cole and Daniels to be the team’s starting center and right guard, respectively next season as Pittsburgh turns their focus to improving the left side of the offensive line that can stand more consistency to make this unit one of the better offensive lines in the NFL.