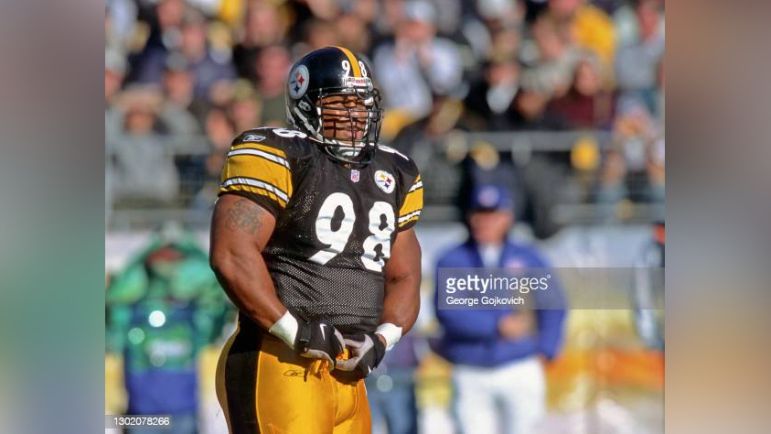 Casey Hampton might be one of the most underrated Pittsburgh Steelers of all-time. That entire defensive line, him, Aaron Smith, Brett Keisel, and Chris Hoke, quietly did their job. All grunts, no glory, allowing the EDGE rushers to attack the quarterback, and inside linebackers to attack the runners. Hampton was the key cog in the middle, commanding double-teams every snap, and his play in Super Bowl XL against the Seattle Seahawks was a huge reason why the Steelers won, shutting down star RB Shaun Alexander.

On his latest episode of Not Just Football, Cam Heyward shared a great story told to him about what Dan Rooney did with the team’s fifth Lombardi Trophy. One that was presumably told to him sometime during his Steelers’ career, potentially by Hampton himself, who was his teammate for two years.

Pittsburgh’s 2005 defense was legendary and full of some of the best Steelers of all-time. But their d-line was the engine of the team and facing a stout Seattle rushing attack, it was critical Pittsburgh hold Shaun Alexander in check. In 2005, he led the league with 1880 yards rushing and an incredible 27 touchdowns as the Seahawks had the league’s best rushing attack behind great linemen like Walter Jones and Steve Hutchinson, both Hall of Famers.

In Super Bowl XL, Alexander was kept in check. 20 carries for 95 yards and zero touchdowns, a quiet game by his lofty standards. Seattle’s #1 ranked offense was held to just ten points, the fewest they scored throughout the entire 2005 season. They met their match with the Steelers’ defense who shut down every weapon on that team.

While Hampton’s role goes beyond the box score, he did make an impact on the stat sheet that day. He finished the game with four tackles and a sack, a critical play deep in Steelers’ territory that put Seattle in 2nd and long that soon led to an Ike Taylor interception.

Hampton is never going to make the Hall of Fame. It’s tough for anyone who played his position to do so and he simply doesn’t have the stats or name-recognition to get to Canton. But he’s one of the greatest Steelers of this century and a building block that let the rest of the Steelers’ defense flourish and win one for the thumb. Hampton was deserving to be the first to hoist the Lombardi off the plane and it was an incredibly classy and thoughtful gesture from Mr. Rooney to give Hampton that moment and honor.