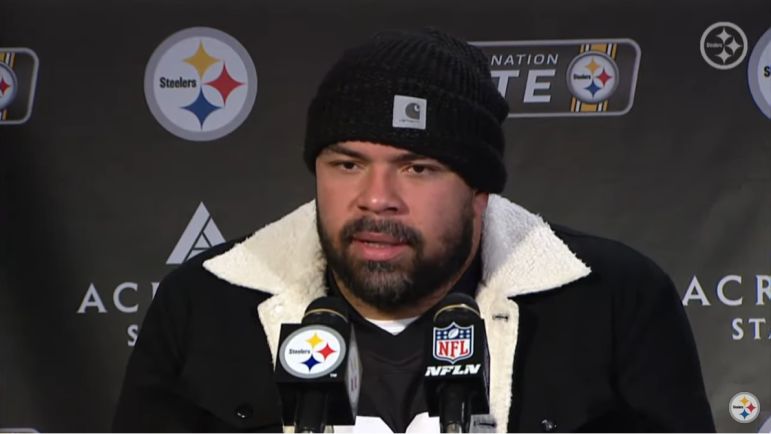 Cam Heyward said it all. One game at a time. One win at a time. The Pittsburgh Steelers are still alive.

After a storybook comeback Christmas Eve win against the Las Vegas Raiders, 13-10, the Steelers staved off playoff elimination. Speaking to reporters after the game, Cam Heyward made it clear this team isn’t done yet.

“We’re still in the hunt and we just gotta, take it one game at a time,” he said after the game via the team’s YouTube channel. “But I like to think we just keep getting better and better as the weeks keep going on.”

Heyward is a driving reason for the win, having his best game of the season and one of the best of his career. He finished the night with seven tackles, three for a loss, with two sacks, and a pass deflection. An amazing and colorful stat line.

What a night from Cam. #Steelers

He made big play after big play as the Steelers’ defense pitched a shutout in the second half, something required until Pittsburgh’s offense put together a game-winning drive. Heyward schooled rookie LG Dylan Parham from start to finish. He now has retaken 5th place on the Steeler’s all-time sack list, passing up T.J. Watt, and he’s now just one sack behind Joe Greene’s mark and 1.5 behind L.C. Greenwood, a Hall of Famer and a should-be Hall of Famer.

The Steelers can still be eliminated if the Los Angeles Chargers and Miami Dolphins both win over the next two days so there’s no guarantee Pittsburgh will have a meaningful game next Sunday against the Baltimore Ravens. But a loss tonight would’ve sealed their fate. According to 538, the Steelers have a 2% chance at making the playoffs, up from less than a half-percent weeks ago. But NFL Network’s Cynthia Frelund’s playoff projector model gives Pittsburgh a 17% chance of making it so clearly, the math differs. And the Steelers aren’t out of it no matter how you slice things.

Now, they’ll watch, wait, and play on eight days from now. Right now, they’re in the hunt. Hopefully the next time they take the field, that’s still the case.