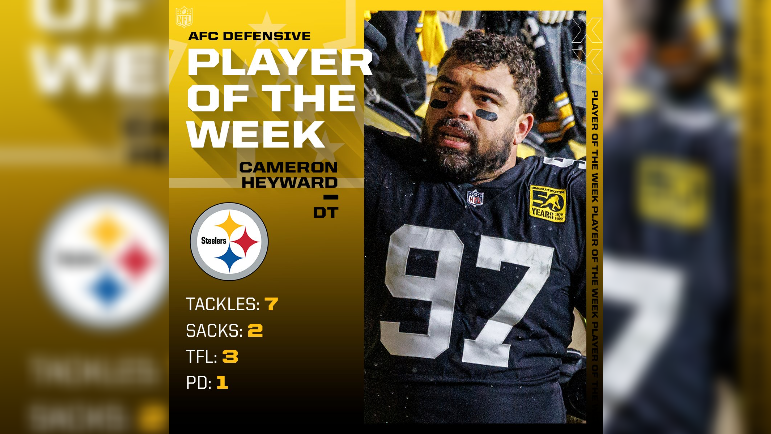 Pittsburgh Steelers’ defensive lineman Cam Heyward has been named Week 16’s AFC Defensive Player of the Week. The league just released their list of winners with Heyward the obvious choice for the AFC defense after a dominant showing in Saturday night’s win over the Las Vegas Raiders.

Heyward put together his best performance of the season. He finished the night with seven tackles (three for a loss), two sacks, two QB hits, and a pass deflection while, per our charting, registering four pressures. He schooled Raiders’ rookie left guard Dylan Parham, bull rushing him backward for a sack on the opening drive.

Heyward helped limit the Raiders’ offense to an ugly showing. Star running back Josh Jacobs was held to only 44 yards and a season-low 2.9 YPC while QB Derek Carr was under duress throughout the game, throwing three costly interceptions. Heyward and the Steelers’ defense kept the score down and kept Pittsburgh in the game, allowing Kenny Pickett to lead the offense to a game-winning 76-yard drive.

Despite being snubbed from the Pro Bowl, Heyward’s performance showed he’s a Pro Bowl and All-Pro caliber player. Though he’s 33, he’s shown little signs of slowing down and has taken on an increased role since Chris Wormley tore his ACL and as the Steelers make a final playoff push. Over the last three games, Heyward has played at least 85% of the defensive snaps, something he previously hadn’t done all season.

For Heyward, his player of the week award is a long time coming. It’s just the third of his career and first since Week 12 of the 2017 season. His other award also came in 2017, in Week 4, after the Steelers beat the Ravens 26-9.

On the season, Heyward now has 62 tackles (12 for a loss), 8.5 sacks, three pass deflections, one forced fumble, and one fumble recovery.