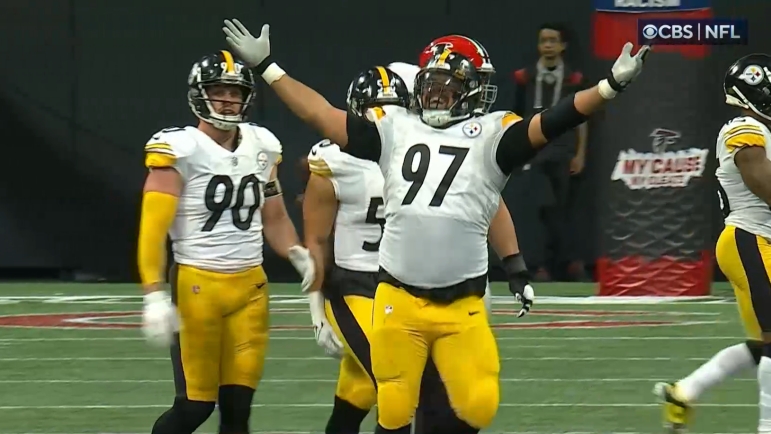 Last Sunday was an emotional game for the Heyward family.

The Pittsburgh Steelers traveled to Atlanta to face the Falcons in Week 13 of the NFL season, beating the home team 19-16. During the game, DL Cam Heyward managed to record a sack and shortly after, his younger brother Connor Heyward caught his first TD in his NFL career.

For the Heyward brothers, the strong performances both had on Sunday meant far more than just helping their team get a much-needed win. Atlanta was the place that the Heyward family called home for a season of life with their father, the late Craig “Ironhead” Heyward played for the Falcons from 1994-1996. The boys lost their father to cancer back in 2006 and he was buried in Atlanta and the two brothers went to go visit their father’s grave site prior to the team’s matchup with the Falcons.

Cam Heyward said he got choked up when Connor Heyward scored his first career TD against Falcons in their hometown of Atlanta. Cam added the two got up early this AM to visit their father’s grave.🙏

“God and my dad are always working together.” #Steelerspic.twitter.com/x3yZEpt1vN

DL Cam Heyward, the respected leader and captain of the team, had to fight back a whirlwind of emotions Sunday during the game after his brother scored his first career TD as both brothers aimed to honor their father back in the place where they used to call home. HC Mike Tomlin asked Cam to put off being the “proud big brother” and remain the team’s strong captain, but the NFL veteran struggled to hold back the emotions he was feeling in that moment.

“So, I’ll be honest, “Cam Heyward said on his podcast Not Just Football Podcast w/ Cam Heyward which aired on YouTube. “So, the series before I had gotten a sack and then the next series they went out and he had gotten a touchdown and like, man, it hit me, and I was not ready for that moment. I’m glad there was no cameras. Coach [Tomlin] had to come over, had to come up to me and was just like, ‘Man, get it together. He’s a Steeler. Stop making him your brother,’ and like was I was messed up. I had to like put the helmet over my face. I was like, please do not look at me right now. I made sure there was no camera next to me, but it was a really cool moment.”

Even the biggest, strongest of men have moments where they can become vulnerable and have their true emotions come out. That’s what occurred Sunday afternoon as Cam Heyward experienced the feelings of sorrow missing his father, joy coming back to a place the family called home and having a strong performance, and pride in his brother making their father proud by making a big play to help Pittsburgh secure the victory while honoring the memory of their father in the process.

I understand where Coach Tomlin is coming from in terms of not wanting his team captain and vocal leader to ride an emotional roller coaster with all its highs and lows. He mentioned before on The Pivot Podcast that he went to OLB Lamar Woodley to get the sack to end the game in Super Bowl XLIII because Woodley was young and inexperienced to the moment, allowing him to think clearer in that situation than some of the other veterans who had so much more invested given the amount of time that they’ve played in the league. It appears to be a similar situation here as Tomlin wanted to have Heyward keep a level head despite all the emotions of the moment coming down on him at once.

If anybody wants to know why I love the Pittsburgh Steelers, just watch this video. 😭 pic.twitter.com/2b6eF42wKx

I can understand where Heyward is coming from as I had to play an important game in high school after losing my grandmother who had battled cancer for years. I was an emotional wreck, and felt those feelings overwhelm me in that moment on the field. Thankfully, we got the win, and I had a good performance, making that moment all-the-more special doing it in her memory. For the Heyward family, they were able to have the emotions not affect their play on the football field, but rather empower them to put forth their best effort to honor their father.

While it’s important to have a steady ship that can sail all tides, football is a game of emotions. Coach Tomlin has mentioned time-and-again that he coaches these young men to leave an impact on their lives well after their playing careers are done. The brotherly bond developed by the team, the impact players have in the community, and the memories made on the field develop strong emotions that can fuel a player in the arena. Cam and Connor Heyward experienced the empowerment of emotions Sunday in Atlanta as this game will be a moment neither brother will soon forget.