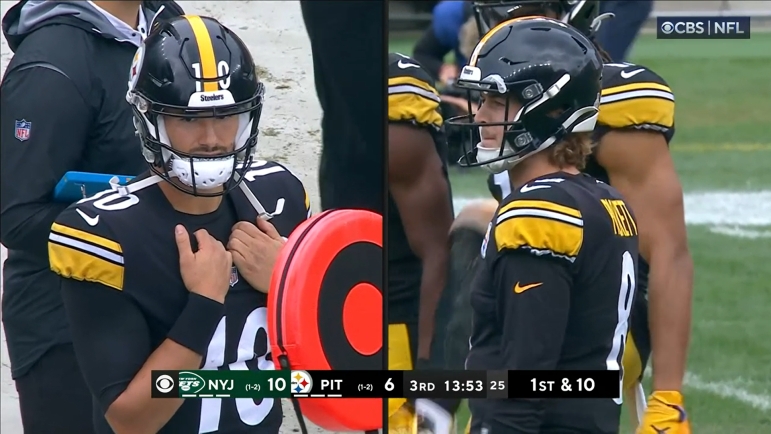 The Pittsburgh Steelers have rotated between free agent singee Mitchell Trubisky and first round rookie Kenny Pickett at the quarterback position this season, the former starting the first four games and the latter starting every game since. With Pickett likely  out with a concussion, Trubisky may wind up starting again. This begs the question of how different the offense looks, if at all.

Many believe it looks the same with both quarterbacks. Carolina Panthers head coach said so himself in a recent interview. Given the Steelers’ rampant offensive struggles regardless of who is under center, it’s hard not to back this notion as many fans have. From a lack of big plays to poor second half showings, these struggles have held constant regardless of who was under center. This article will make the case that the two quarterbacks are far from the same by delving into their tendencies.

The raw numbers paint a similar picture. Kenny Pickett has a 65% completion rate, four touchdowns, eight interceptions, and a rating of 74.9. Meanwhile, Trubisky has a 63.3% completion rate, four touchdowns, and five interceptions. Pickett has -0.017 EPA per play, while Trubisky has -0.004. However, the two quarterbacks differ in a number of ways nonetheless.

For a few seasons now, Steelers Nation has made their desire for the team’s offense to be more aggressive and take shots down the field no secret. The numbers show they got their wish with Trubisky. According to PFF’s premium stats, Trubisky throws the ball over 20 yards from the line of scrimmage on 19.0% of his attempts, which ranks first in the league among quarterbacks with at least 100 attempts, and his average depth of 10.3 air yards per target ranks third in the league. However, his completion rate on said throws is 61.8%, which ranks 31st in the NFL.

Pickett is about as close to a polar opposite of this. Indeed, 52.4% of his throws are 0-9 yards from the line of scrimmage, which ranks first in the NFL. The rookie quarterback also ranks 26th in the NFL in ADOT with 7.4, and is right around the league average in percentage of deep throws at 11.9%. When Pickett does throw deep, the results are not great, as he ranks fifth to last in the NFL with a 49.8 passer rating on said throws.

Out of all the quarterbacks that have started a game for the Steelers with Matt Canada as offensive coordinator, Kenny Pickett takes the longest to throw. Indeed, he takes 2.97 seconds to throw, compared to 2.77 by Trubisky, 2.26 by Ben Roethlisberger in 2021, and 2.46 by Mason Rudolph in his one start. Pickett takes the sixth longest to throw in the league, and has the fourth lowest percentage of drop backs in throws under 2.5 seconds.

All of this is to say, Trubisky and Pickett are far from the same quarterback, and both have their strengths and weaknesses. They have different play styles, and the offense flows differently as a result. Given Pickett is the one the team will start for at least the next few seasons, paying attention to his play style and tendencies is likely more worthwhile.