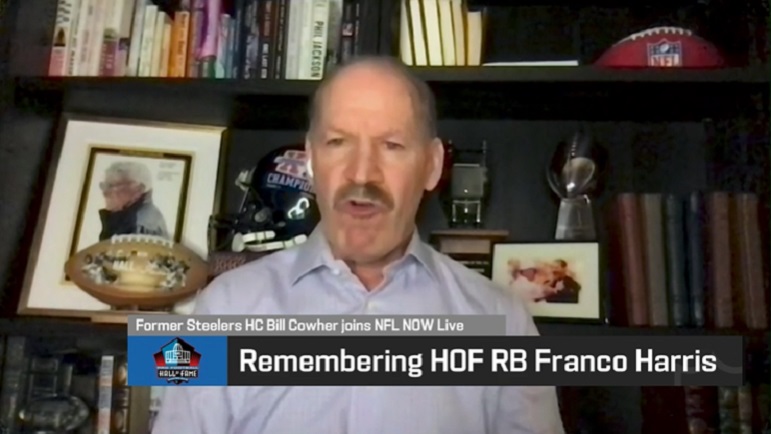 As the Pittsburgh Steelers were preparing to face the Las Vegas Raiders on the 50th anniversary of the iconic Immaculate Reception, the tragic news of the passing of Hall Of Fame running back Franco Harris broke. This news struck past and current Steelers hard, as Harris made an effort to know them personally. In a Thursday interview on NFL.com, former Steelers’ head coach Bill Cowher told a story about his time with Harris.

“I used to see him all these different functions and I used to try to grab him into a corner,” Cowher said with a laugh. “I said, ‘Franco, just tell me, did the ball actually hit the ground? I mean, just, just between you and I.’ He goes, ‘I really don’t know.’ I go, ‘but no, you really probably do’. I said, ’cause you would feel it if he hits the ground.’ And he goes, ‘coach, it really doesn’t matter’. I said, okay, well, I guess so much for that.”

Harris was not lying to Cowher. Indeed, he often stated that he had no recollection of the Immaculate Reception. This only makes sense, as it is not unusual for that amount of adrenaline to lead to someone blacking out in such a euphoric moment.

“I always remember I was listening to Myron Cope,” Cowher continued. “There’s a name from the past on the radio, with my dad when that play took place. I was in Pittsburgh and just what that play meant, and it really kind of started the dominance that the Steelers had in the seventies with that play.”

A Pennsylvania native, Cowher was around fifteen years old when the play took place. Cowher did not stray far from home, as he went on to play linebacker for the Philadelphia Eagles in 1979 and from 1983–1984, and eventually coached the from Steelers 1992–2006. If anyone can speak first-hand about the impact the Immaculate Reception had, it’s Cowher.

Myron Cope was known as the voice of the Steelers for decades, as he was their color commentator for 35 years. Cope was an iconic figure in Steelers’ history, and was influential in the invention of the Terrible Towel. As such, he was recently inducted into the team’s Hall Of Honor, and is indeed an all-time classic.

Cope was a big part of the Immaculate Reception. Running back John “Frenchy” Fuqua, who was Bradshaw’s intended target on the play, stated that Cope was cautioning against reporters questioning the play after the game. As such, Fuqua never told reporters whether the ball hit the ground, a promise he is keeping to this day.

The tragic passing of Harris will not soon be forgotten, nor will the impact of the play. From his play on the field to his charity off the field, Harris will forever be one of the greatest Steelers in franchise history.