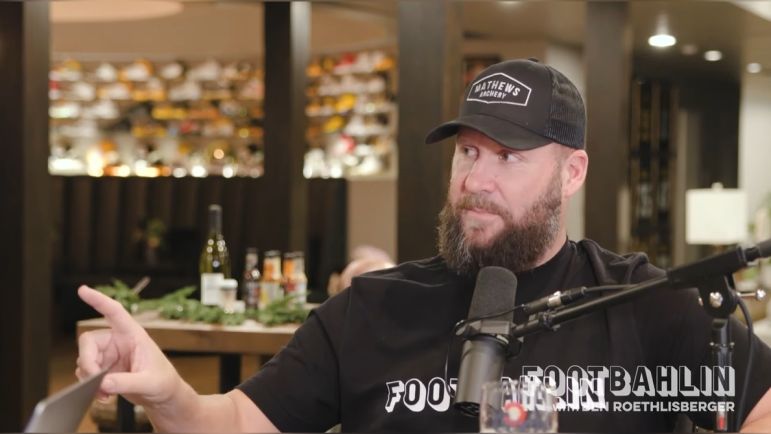 The Pittsburgh Steelers had gone on a 3-1 run coming out of their bye week after finishing the first half of the season with a .250 winning percentage. That was until they ran into the Baltimore Ravens on Sunday afternoon, who handed them their eighth loss of the season and have them teetering on the brink of their first losing season since 2003.

And it’s not at all clear that their path forward is all that much better. Even a game that might have previously been seen as a layup next week against the Carolina Panthers has no longer become a gimme. A team with an interim head coach that was a seller at the trade deadline building for the future, they are 3-1 in their past four games and have former Steelers quarterback Ben Roethlisberger’s attention.

“They’re going down to Carolina, a team that won on the road today, and won in Seattle, which I didn’t expect to happen”, he said on his Footbahlin podcast recorded on Sunday. “I thought that going down to Carolina was going to be a definite win, and watching that today, man, Carolina looked really good. Going into Seattle? That’s not an easy place to play. But it’s a big one”.

Carolina fired head coach Matt Rhule after he got off to a 1-4 start of the season, then traded two of their best offensive weapons. Steve Wilks was named interim head coach, and it was slow going at first, losing three of his first four games, but they’ve turned things around as they’ve begun to build an identity.

Which does include moving the ball on the ground. Minus a game against the Ravens, they have rushed for at least 185 yards in three of the past four games—the ones they’ve won. They’ve now plugged Sam Darnold in at quarterback, who has recorded wins in the past two games with a 93.6 quarterback rating.

The defense has been on the rise as well, holding three of their past four opponents to under 300 total yards and 15 or fewer points.

Sunday marked their first win in a game in which their opponent scored more than 15 points this season, defeating a quality opponent on the road in the Seahawks, 30-24—and that was with a Seattle touchdown with 17 seconds to play. Carolina never trailed.

The Steelers aren’t even sure who is going to be at quarterback next week with Kenny Pickett in concussion protocol. Even if he doesn’t play, will Mitch Trubisky start, or are they considering shifting to Mason Rudolph?

All I know is that this game looked a lot easier on paper a month ago than it does now, even taking into consideration where the Steelers were at that point. Roethlisberger’s right that this is a big one now. And it could be the one that secures head coach Mike Tomlin the first losing season of his career.