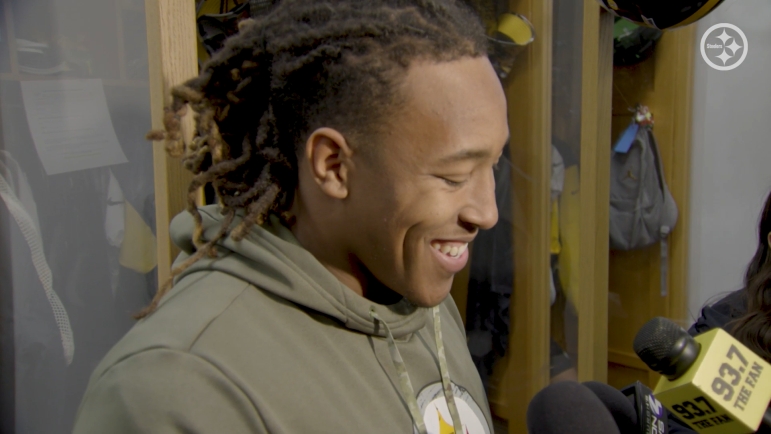 One of the stars of the game for the Pittsburgh Steelers earlier this week was veteran running back Benny Snell Jr., a man who hadn’t had a touch all season biding his time behind Najee Harris and Jaylen Warren only to be called upon due to injuries to step up and then proceeding to do so.

While his workload was not overly demanding, he finished Monday night’s game with 62 rushing yards on 12 carries, including the game-winning touchdown, along with one reception that picked up six yards. He also held up well in pass protection on top of that.

None of this comes as a surprise to him, however, his self-confidence a source of comfort for him as he pushes forth with whatever the coaching staff asks him to do, even if it is to grind it out on special teams while staying ready for offensive work. He takes pride and pleasure in all of it.

“I’m thankful to be in the position I am, to have such good teammates, being able to play for the Steelers, to be with a good offense,” Snell told reporters yesterday, via the team’s website. “And I’m very aware of what I’m capable of. I know my self-worth, my value, so I can never be too down knowing what I can do.”

A fourth-round draft pick out of Kentucky in 2019, he lost the backup running back role earlier this offseason to Warren, a college free agent who really came on and impressed during training camp and the preseason and who has even been eating into Harris’ workload.

Snell came out of college in the bell-cow mode, known for being a hard-nosed runner whose strength is in the game of attrition. Historically, his numbers in the NFL show that there is a correlation between the number of touches he gets in a game and the quality of performance he displays.

He had not gotten many opportunities, however, since 2020. In fact, he had over 100 carries in each of his first two seasons, although the key factor there was playing behind a starting running back in James Conner who had a pattern of getting nicked up and thus missing time.

Harris also came out of college in the workhorse mode, and that’s how the Steelers used him as a rookie, logging an NFL-high 381 touches last year. While they shifted away from that model in 2022, it was largely because of gaining trust in Warren to supplement him.

A pending free agent next year, it is unclear whether or not Snell is in the Steelers’ future beyond the remainder of this current season. He has been a steady contributor on special teams since his rookie season, something that he continues to do even now. He is unlikely to have much of a market otherwise.

With Harris still nursing an injury and uncertainty over whether or not he will play on Sunday, it’s possible that he gets another opportunity to get work on offense, however. Warren appears to be on track to return, but the two, along with Anthony McFarland Jr., would likely be asked to share the load.