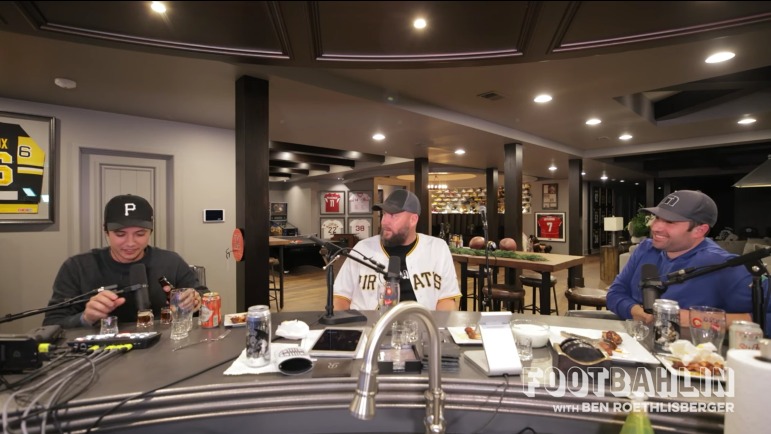 After a three-interception outing off the bench against the Baltimore Ravens in the Pittsburgh Steelers Week 14 loss to their division rivals, Steelers quarterback Mitch Trubisky got the start in place of an injured Kenny Pickett in Week 15 and helped lead the Steelers to a 24-16 win on the road over the Carolina Panthers. Trubisky was 17-22 for 179 yards and a rushing touchdown in the win, and most importantly, he didn’t turn the ball over. Former Steelers quarterback Ben Roethlisberger said on Episode 17 of his Footbahlin podcast that he was proud of Trubisky for the way he played against Carolina.

“Mitch I thought played well. He didn’t wow and blow you away, but he didn’t do anything to lose the game. He managed the ball, he made good plays, he did what he was supposed to do, he helped them win it. For him, I was happy for him, proud of him, for the bounce-back he had from the week before,” Roethlisberger said.

At some point, we know what sort of quarterback Trubisky is at this point in the year. He can help move the ball down the field, and if the run game is working the way it did on Sunday, he can be a really good game manager. He also made some clutch throws to keep drives going on 3rd down, especially late in the game.

But the key for him against Carolina was to limit turnovers, especially coming off the game in Baltimore when two of the three interceptions he threw came deep in opponent territory. Trubisky had to keep the ball in Pittsburgh’s possession, and he managed to do so as the Steelers had total control of the game.

The team controlled the ball for over 36 minutes, and while they only really hit two deep shots (a 19-yard completion to wide receiver Diontae Johnson and a 38-yard completion to rookie receiver George Pickens), they didn’t need to go downfield to win. The offensive line was blocking well, particularly the left side in the first half, and the Steelers were winning with the run game. Trubisky didn’t make any mistakes, used his legs successfully on a few scrambles, including the touchdown to cap off Pittsburgh’s 21-play drive coming out of the half, and played sound, fundamental football.

You can’t really ask for much more from Trubisky. While I was in the camp of wanting to see Mason Rudolph start Sunday, the team made the right decision by sticking with Trubisky. He didn’t have to do a lot, but he did what was needed to win. I said it after the team beat the Atlanta Falcons, but the iteration of the Pittsburgh Steelers we saw Sunday is the type of team I thought we’d see for the majority of this year. A tough, running-focused team led by a talented defense that controlled possession. That hasn’t been the case for the whole season, but we’ve seen it a lot more coming out of the bye, with the team running for over 100 yards in four of their five games since the Week 9 bye.

If that’s the last memory we have of Trubisky in a Steelers uniform, it will be a good one. Credit to Trubisky for coming in and doing his job, and while it would’ve been nice if he had more success early in the season, he never complained when he got benched and by all accounts is a great teammate and leader. I’m glad he was able to find success in what might be his last stand in Pittsburgh.