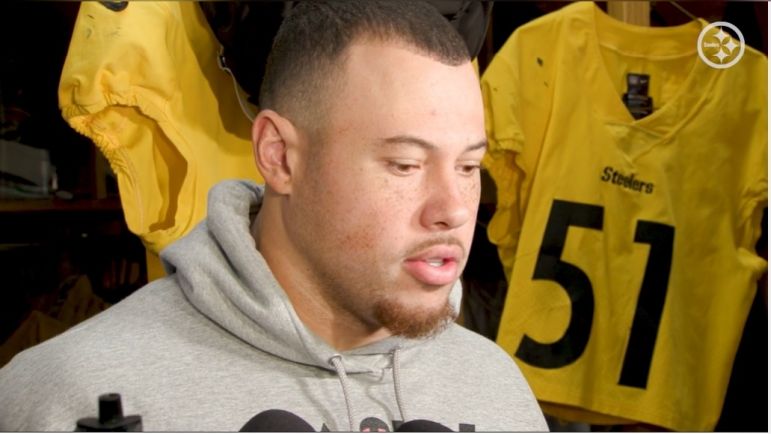 For Alex Highsmith, stopping the run is nothing but a state of mind. A battle of wills, a test to see who wants it more. For the last six quarters, it sure hasn’t been the Pittsburgh Steelers. Allowing 333 yards since the second half of the Atlanta Falcons game, Highsmith knows the defense’s mentality must change ahead of a matchup versus a run-heavy Carolina Panthers attack.

Speaking to reporters Wednesday, Highsmith outlined how Pittsburgh must improve.

For lack of a better word, the Steelers got their butt kicked in Sunday’s loss to the Baltimore Ravens, allowing 215 yards on the ground. As we showed in our film study, Pittsburgh had schematic and assignment issues but above all else, they simply weren’t strong enough to hold the point of attack and get off blocks. Despite playing with some backups and rotating at RG, the Ravens’ o-line won the day while FB Patrick Ricard and TE Josh Oliver consistently beat up the Steelers’ linebackers.

Things won’t be any easier this weekend against the Carolina Panthers. Quarterback mobility won’t be a threat but the Panthers take an old-school and physical approach. They’re a run-heavy team with a two-headed attack in Chubba Hubbard and D’Onta Foreman, two squatty and downhill runners who don’t dance. Carolina often employs more than five offensive linemen on the field and has their “Arbys” package of eight offensive linemen, a grouping colorfully nicknamed for “having the meats.”

#Panthers Brady Christiansen on having 8 OL out there on one play vs. Seattle.

"Was fun to have 8 big uglies out there… It's a fun package to have. We call it 'The Arbys'. We have the meats"

Even when they don’t go that heavy, they’ll regularly employ an offensive lineman as a fullback and run Lead Strong/Weak into the heart of the defense.

Coming into the year, a Week 15 matchup against the Panthers felt like a fairly winnable game. Now, it feels far less of a sure thing. Interim head coach Steve Wilks has given Carolina an identity and they’ve won three of their last four, in large part due to their running game.

Pittsburgh’s season may essentially be over but they can play for pride. That’ll be revealed in how well they stop the run this weekend.