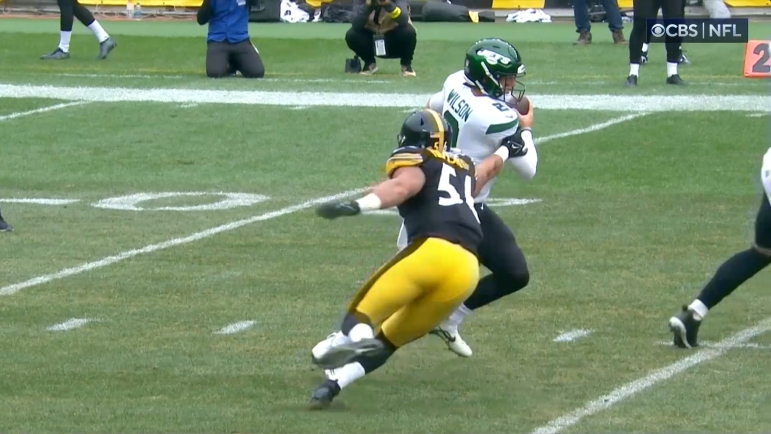 As one glances across the NFL landscape at the top edge rushers for the current season, the usual suspects appear at the top of almost every list. Think guys like Myles Garrett, Micah Parsons, Nick Bosa and the reigning DPOY T.J. Watt, who likely would be in the top spot if not for time missed due to injury.

The Next Gen Stats team at NFL.com earlier today compiled their list of the Top 10 edge rushers as we head into Week 14, basing each player’s score off key metrics in both the pass and running game.

To no surprise, Garrett, Parsons, the front-runner for this season’s DPOY thus far, and Bosa were ranked first through third. However, sixth on the list and also to no surprise, at least to Steelers fans, is third-year player Alex Highsmith, who’s amassed 10 sacks thus far and currently is tied for the league-lead with four forced fumbles. He’s also tallied 49 QB pressures this season, second only to Garrett.

His coming out party began back in week one, when he collected three of the team’s seven sacks on Cincinnati QB Joe Burrow, and his steady play has continued throughout the course of this season.

“Highsmith has played a career-high 86 percent of the Steelers’ defensive snaps this season, and the greater opportunity has led to a bigger impact on the field,” NFL.com writes.

With Watt on the shelf, Highsmith went from frequently facing a single blocker to now being the hunted, as Watt is an instant double, or sometimes, triple-team, thus freeing up extra attention to devote to Highsmith. However, his play flourished, and recently he was even voted the AFC Defensive Player of the Week after notching two sacks and a forced fumble in the team’s 20-10 victory over the Saints.

Now with Watt back in the fold, and the team riding a three-game win streak, both players will look to lead the charge as the team’s playoff hopes remain on life support. It is noteworthy that the team is 4-1 in games that both players have played in, and with a Ravens team looming Sunday that’ll be missing QB Lamar Jackson, the defense should smell the blood in the water.

We certainly cannot look at Highsmith as second-fiddle to Watt anymore, as his play this season should undoubtedly garner him Pro Bowl honors. His play three years into his career already seems to be well ahead of the curve of former first-rounder Bud Dupree, who chased a payday with the Titans. The Steelers look wise in allowing Dupree to walk and they would be wise to lock up Highsmith as a core defensive piece for years to come alongside Watt.