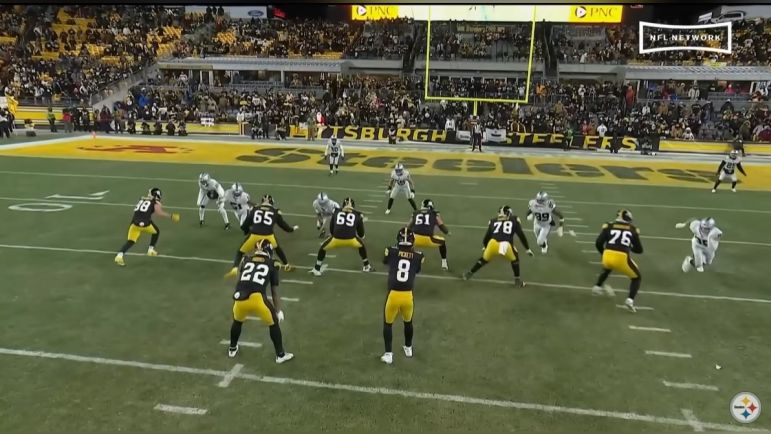 Pickett has been receiving a lot of attention the past few days after he led a ten-play, 76-yard touchdown drive with just under three minutes to go to keep the Steelers’ playoff hopes alive. CBS Sports’ Jeff Kerr took note of it, and in his weekly “One thing we learned about each NFL Team” article, for the Steelers, he wrote about finding out Pickett has a clutch gene.

“Pickett’s final drive is why the Steelers still have a shot at the playoffs with two games to go — in a rebuilding year,” Kerr wrote. “Pickett finished 7 of 9 for 73 yards on the final drive, which includes the game-winning touchdown to George Pickens with 46 seconds left to give Pittsburgh a well-deserved win.”

While this was not Pickett’s first game-winning drive, it was certainly his best as each one has gotten better and better. Pickett’s first game-winning drive is really only a technicality as most of it happened in the third quarter in the Steelers’ 20-10 victory against the New Orleans Saints. He only took two snaps on that drive in the fourth quarter and threw no passes.

His second game-winning drive was against the Indianapolis Colts, on Monday Night Football, with Pickett completing five passes for 35 yards as he quickly marched Pittsburgh 75 yards to score the game-winning touchdown with just under ten minutes to go in the game.

The game-winning drive on Christmas Eve was certainly Pickett’s best as he had to throw the ball often, and with the clock dwindling down it was Pittsburgh’s last chance. While some of Pickett’s completions on the drive could be classified as check downs, he still made a couple of big-time throws. NFL’s Next Gen Stats even graded two of Pickett’s completions on the drive as his most improbable of the night, giving the game-winning touchdown pass to George Pickens a 53.9% chance of being completed and his completion to tight end Pat Freiermuth earlier in the drive near the sideline only a 45% chance of being completed.

One of the funniest things about CBS Sports now saying Kenny Pickett has the clutch gene was that only a few weeks ago they graded him the least clutch quarterback in the NFL. I remember writing that it was way too soon to call Pickett clutch or unclutch due to the fact that at the time he did not play in many close games.

Obviously, as time has gone on and Pickett has played in more close games, he has risen to the occasion. While right now we have no idea how good of a player Pickett will be, if he continues to be clutch and help the Steelers win close games he will probably be viewed as a pretty good quarterback by the masses. A lot of time being clutch separates good quarterbacks from great quarterbacks. We will just have to wait and see which category Pickett will fall into.