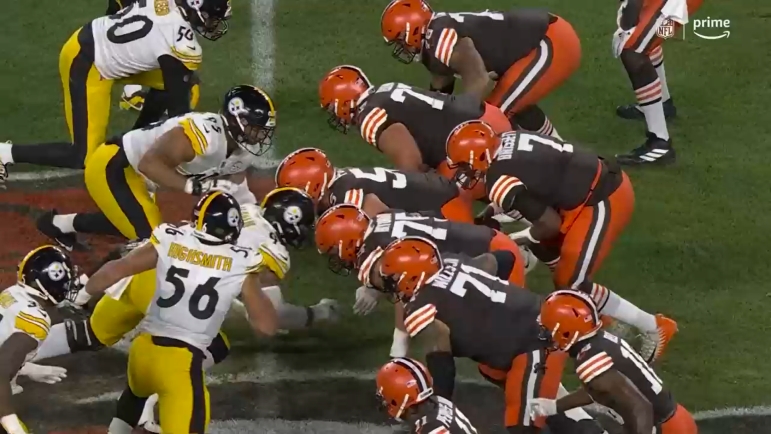 Inside linebacker Myles Jack might be new to the AFC North, but it didn’t take him long to get initiated into what that means. And considering the Pittsburgh Steelers haven’t even played the Baltimore Ravens yet, that’s saying a lot. Though it also helps that he’s coming out of the AFC South.

“It’s real. It is real”, he said of the physicality and competitiveness that is the reputation of the division battles, as he told Aditi Kinkhabwala during an interview on 93.7 The Fan yesterday. “I thought it was like a hype or a hoopla or just like a marketing scheme. No. AFC North is a bloodbath”.

The Steelers opened their season against the Cincinnati Bengals in a game that they managed to win in the final seconds of overtime on a field goal, a game during which the defenses largely dominated. Three weeks later the Steelers were bowled over by Nick Chubb and the Cleveland Browns before coming up short in a rematch a few weeks back against the Bengals. He’s excited to finally face the Ravens as a Steeler.

“It’s a physical matchup and that’s something that we really, really look forward to is just a physical slugfest”, he said. “Your 11 versus our 11, win your one-on-ones and get to the football. There’s nothing like that. Football in December when it’s cold, it’s like what you grew up watching on the NFL Network on the NFL Films, so it’s fun to be a part of”.

It’s not that he’s never played the Steelers or the Ravens, of course. His Jacksonville Jaguars actually beat Pittsburgh twice at Heinz Field back in 2017, once in the playoffs (cue the “thanks for reminding me” comments). But remember, he’ll be the first one to tell you where he’s coming from.

“AFC South is kind of like, the Titans are gonna do what they typically do, the Colts, it’ll be like the Titans and the Colts and then the Jags and Houston will kind of be scrabbling it out for the third spot”, he said. “But the AFC North, it’s like everybody can beat everybody”.

Of course, the division is actually lopsided right now if you look at the standings. The Ravens and Bengals are 8-4 while the Steelers and Browns are 5-7. But all of them are talented teams in their own regards and coming off of wins regardless of where they are in their own seasons.

The Browns finally got Deshaun Watson on the field and after last week he can only really get better. The Steelers are obviously playing much better, winning three out of their last four. So he is in that mix to understand that even the teams with losing records right now are competitive. And the Steelers and Browns did both beat the Bengals.

There was certainly a stretch where both the Browns and the Bengals were doorstops in the division, but that’s no longer the case. The reality is that all of these teams have won playoff games since the Steelers last won theirs, so they can’t exactly boast too much anyway.