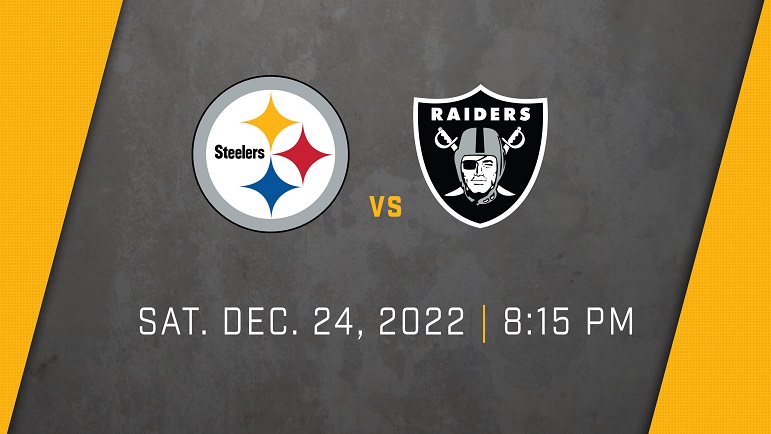 The Pittsburgh Steelers put out a lackluster effort in the first half, earning just three points. Don’t leave your television set during halftime, as Franco Harris is set to be honored in front of a national audience.

The Steelers will get the ball back after the half.

LIVE: We honor the life and career of the late Franco Harris with the retiring of his #32 jersey at halftime.

On 1st down, Pat Freiermuth gained 10 yards with his arm fully outstretched at the end of the play.

1st and 10, Freiermuth called for offensive pass interference. He started the block too early on the screen pass. Back to Freiermuth on 2nd for 15. 3rd and 5, Pickett to Pickens for 25 yards. He caught the ball along the sideline and then cut inside for a few extra yards.

Chandler Jones was injured on the play for the Raiders.

Najee Harris tackled for a one yard loss on first down. Kenny Pickett tossed an interception right to Denzel Perryman on 2nd down. Returned for a good chunk of yardage.

looking like another Ravens games.. good drives end in no points, or INTs. #Steelers

Steelers haven't won a game this year when they turn the ball over.

This one isn't looking so hot. #Steelers

Arthur Maulet said ‘not so fast’ on that interception, grabbing one of his own. He tipped the ball up to himself and intercepted the ball.

Kenny Pickett was sacked on 1st and 10 for a loss of 6. Pickett complete to Pickens for 8 yards, but still a 3rd and 8 to go. He found Diontae Johnson for 14 yards.

Najee Harris broke a tackle in the backfield and turned a loss into a 7 yard gain streaking up the left sideline. On 2nd and 3, Najee was tackled for a loss. On 3rd and 5, Pickett complete to Najee Harris at the line of scrimmage for no gain. Chris Boswell out to attempt a 52 yarder and he missed. Hooked left again.

The Raiders were moving the ball a bit, but Minkah Fitzpatrick intercepted a 2nd down pass off a drop from the wide receiver. Hunter Renfrow with the mistake there for the Raiders. The offense must capitalize.

Come on offense. You gotta do something.

.@minkfitz_21 gets the @steelers second INT of the night! 🔥

Diontae Johnson dropped the first down pass that would have been a large gain. On 2nd, Pickett had to throw the ball away after rolling out to his right. The 3rd down pass was batted down at the line of scrimmage. The crowd is booing the Steelers. Not at all the type of performance expected from this team on such an important night in Steelers’ history. The punt was returned to about the 31 yard line.

TJ Watt sacked Carr for a loss of 3. On 2nd, they picked up 4 with a Josh Jacobs rush. They converted on a pass in the middle of the field to Hunter Renfrow.

The next play, Jacobs rushed for a huge gain, but it was called back due to a facemask. Alex Highsmith ended the drive with a huge sack on Carr. 4th and 25, and the Raiders will punt from pretty far back in their own end. Once again, the Steelers offense should have good field position. Its still just a one score game, so there is hope.

The punt was pretty poor for the Raiders, travelling just 29 yards.

On 1st down, Najee Harris gained just a yard. On 2nd, Najee caught the swing pass and hurdled the defender cleanly for an extra handful of yards. A gain of 17.

On 1st and 10, Kevin Dotson called for holding. 1st and 20, Pickett complete to Diontae Johnson for 11 yards along the left sideline. On 2nd, Najee Harris rushed up the middle for 4 yards. 3rd and 5, Pickett checked down to Jaylen Warren who converted the first down. The Steelers are knocking on the door of the red zone.

A one yard run on 1st down and an incomplete pass on 2nd set up 3rd and 9. Denzel Perryman was injured on the 2nd down play. On 3rd down, Pickett complete to Pickens, but well short of the sticks. Boswell out to attempt his 4th field goal of the day. He is 1-for-3 so far. This one is much closer. The field goal is good. 10-6 Raiders.

Cam Heyward in on 2nd down for a huge sack. Minkah Fitzpatrick blitzed from the safety position and Heyward cleaned up. 3rd and 18, a checkdown pass to Ameer Abdullah but they were well short of the line to gain. The Steelers got the ball at their own 21.

Najee Harris ran for 8 yards between the first two downs, but Pickett’s pass was batted down on 3rd. The Pressley Harvin punt went 46 yards.

Three-and-out for the Raiders. Heyward with another TFL on the drive. Steelers take over at their own 24.

On 1st down, Pickett complete to Najee Harris for 6 yards. On 2nd, Pat Freiermuth caught a 10 yard pass along the sideline. The play was under review, but it was upheld as a catch.

On 1st and 10, Pickett incomplete with a scary interceptable pass. On 2nd, Najee Harris over the middle and he broke multiple tackles for a first down.

With 1:01 remaining, the Steelers have 3rd and 5 in scoring position. The score is 10-6 and any hope of playoffs for both teams is on the line. Freiermuth caught the pass, but was short. Timeout #2 taken. Kenny Pickett QB sneak, on 4th and 1. The Steelers convert. It all comes down to 00:50.

On 1st and 10, Pickett with a dart in the middle of the field to George Pickens. Touchdown! 13-10 Steelers.

Cam Sutton calls game with an interception. Steelers win! It wasn’t pretty, but the playoff chances remain alive and Franco Harris’ big night ends in a Pittsburgh W. Franco is definitely smiling from up above.

"I felt like he was with us tonight."@kennypickett10 and the @steelers honored Franco Harris in the best way possible tonight. 🙌 pic.twitter.com/gg9Z7DwzOX