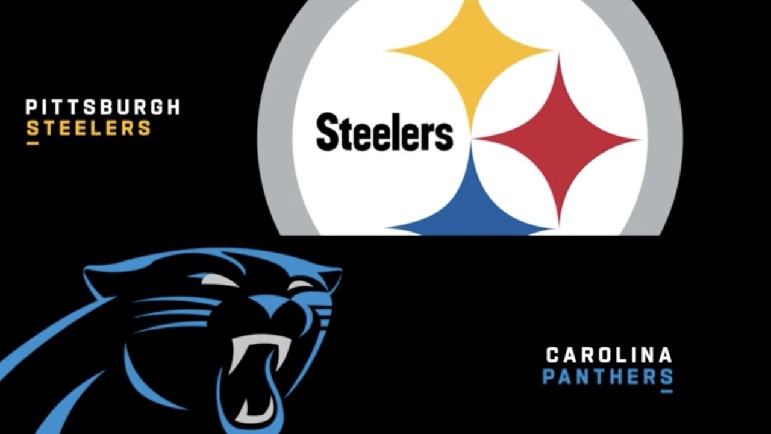 The Pittsburgh Steelers currently lead the Carolina Panthers 14-7 at halftime. The Steelers will receive the ball in the second half.

The first two offensive drives of the game were touchdown drives for Pittsburgh which was great to see, but things fizzled out as the half went on.

Blindside block called on the Steelers return team. Back at their own 9 yard line, Trubisky complete to Johnson for 7 yards. Najee Harris up the middle for a gain of just one yard. 3rd and 2, back to Najee for two yards and a first down.

On 1st and 10, Najee Harris was stuffed for no gain. Trubisky threw the ball in the turf on 2nd down. On 3rd, Trubisky connected with Diontae Johnson for 12 yards and a first down.

3rd and 1 after Najee Harris’s 9 yard rush. Steven Sims with the end around for 22 yards. The Steelers operating out of hurry-up and it is working, keeping the Panthers on their back foot.

Diontae Johnson caught the pass and ran for 18 yards. Steelers now in the red zone.

On 1st down, Najee Harris up the middle for two yards. Two more yards on 2nd down to Diontae Johnson. 3rd and 6, Diontae Johnson shook three tacklers to pick up the first down. Diontae called for taunting. He converts for a new set of downs, but backs the offense up beyond where they started.

On 1st and 10, complete to Myles Boykin for no gain. On 2nd and 10, Trubisky found Johnson for 9 yards. 3rd and 1, Derek Watt powered through the defensive front for two yards and a first down conversion.

The Steelers have now eaten over 11 minutes of the quarter on this one drive. 20 plays and counting.

Trubisky kept the ball himself up the middle for the touchdown. 21-7 Steelers.

After being bullied last week, the #Steelers have responded in a massive way. Imposing their will.

Mike Tomlin still has the attention of this team.

It's only the seventh such drive since 2001. #Steelers

Terrace Marshall caught the pass behind the line of scrimmage and slipped with Robert Spillane in the area for a loss of two yards. The next play, a 45 yard catch and run by Chuba Hubbard as he burned Robert Spillane across the middle.

1st and 10, Foreman off left tackle for just one yard on the play. On 2nd down, Alex Highsmith sacked Darnold for a loss of 8. 3rd and 17 coming after the sack. Cam Heyward got in on the sack party the next play for a loss of 10. Just like that the quarter comes to a close.

During the break, Marcus Allen randomly popped off on the Panthers’ huddle and unsportsmanlike gives the Panthers a fresh set of downs. Was 4th and 27, now 1st and 10.

On 1st and 10, Hubbard off left tackle for 2 yards. On 2nd, Darnold nearly sacked and dumped the ball off out of bounds. Terrell Edmunds made a hell of a play there to disrupt the pass. On 3rd and 8, Darnold scrambled up the middle, but lost a yard. Field goal is good. 21-10 Steelers.

Pressley Harvin’s punt took a Pittsburgh roll and netted 54 yards. Carolina takes over at their own 27 yard line.

TJ Watt called for offsides on 1st down to wipe out Terrell Edmunds’ sack. On 1st and 5, Darnold incomplete short left. 2nd and 5, DJ Moore gained 13 yards along the right sideline with Levi Wallace in coverage.

1st and goal from the 4 yard line, Foreman rushed for two yards. Timeout #1 by the Steelers.

Alex Highsmith stuffed Foreman on 2nd down forcing a fumble, recovered by the Panthers. 3rd and goal, Heyward and Watt split a sack for a loss of 10 yards. The field goal is good. 21-13 Steelers.

Maybe the turning point of game:

Steelers four sacks today are the most they've had in a game this year since Week One. #Steelers

On 1st down, Najee Harris up the middle for one yard. On 2nd, an incomplete pass to George Pickens. The ball was slightly deflected by the receiver and Pickens couldn’t readjust his hands in time. Pickens called for false start, so 3rd and 14. Trubisky complete to Diontae Johnson on a dig route good for 19 yards and a conversion.

On 1st and 10, Najee Harris up the middle for 6 yards. On 2nd, Najee stuffed behind the line for a loss of two. On 3rd and 6, Trubisky complete to Johnson for 9 yards. Diontae Johnson is having a huge day!

The Steelers are currently 11 of 14 on 3rd down today.

Diontae Johnson is responsible for 5 of those.

Diontae Johnson has now tied the NFL record for most receptions by a WR (75) without a TD over a season, held by Hall of Famer Raymond Berry.

He'll need a TD at some point this year in order to avoid keeping the record. #Steelers

Jaylen Warren being used to bleed out the clock, forcing two of Carolina’s timeouts. 3rd and 1, and a conversion here would very nearly end the game. Trubisky kept the ball and converted. Steelers are 12-15 on third down today.

On 1st and 10, Jaylen Warren rushed around the left end for just a yard, but stayed inbounds.

2nd and 9, Najee Harris rushed for three yards. Timeout #3 by the Panthers. On 3rd and 6, Najee Harris could not gain a first down. Tough decision from the 32 yard line, but the Steelers elect to kick the field goal. Boswell seals the deal. 24-13 Steelers.

Nice moment there from Kenny Pickett to Mitch Trubisky, congratulating him on the win. #Steelers pic.twitter.com/jUOzGOZfvj

On 1st and 10, Darnold incomplete to Tremble. On 2nd, Tremble caught the pass for a gain of three. On 3rd and 7, DJ Moore catches the deep pass for 26 yards. Robert Spillane was in coverage. Darnold spiked the ball to kill the clock.

Diontae Johnson touched the ball early and nearly made a huge mistake, but George Pickens was able to recover. Glad he didn’t get flagged for hitting the official there. The Steelers kneel the ball and win the game. Steelers advance to 6-8.