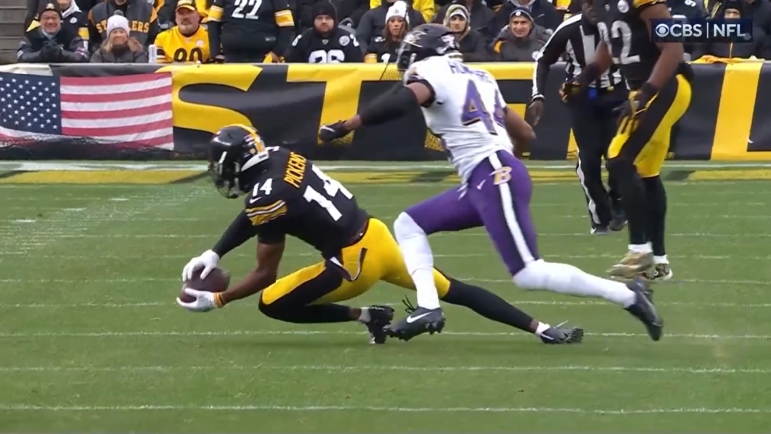 Reasoning: Following what certainly appeared from the outside to be the most frustrating game of his young career, Steelers rookie wide receiver George Pickens had a more representative outing on Sunday against the Baltimore Ravens, catching three passes on three targets for 78 yards, including two explosive plays on deep passes.

At least from some corners, Steelers rookie wide receiver George Pickens was being viewed under a microscope this week after he struggled to contain his frustrations and his composure during last week’s game.

He was only targeted twice, catching one pass for two yards, about which former Steelers quarterback Ben Roethlisberger said that he believes that target was specifically designed just to appease the receiver—which of course didn’t really work.

Well, he only got one more target this week than he did last week, but he was able to do a little more with them. For starters, he caught all of them, and put up 78 yards with them. Two came down the field, and really, all three of them were pretty impressive plays.

Pickens was actually targeted a fourth time, right after his 42-yard reception, but it officially goes down in the record books as a no-play because it resulted in a defensive pass interference penalty being called against the defensive back. That gave the Steelers six yards and a 1st and goal from the 1, resulting in a touchdown on the next play.

With that being said, I don’t think that those who harbor some concerns about his long-term maturity would be wholly satisfied by yesterday’s events. Even during that game, there were some moments of frustration beyond what might be seen as the norm when he feels that he is not getting targets that he should get (i.e. when he’s open, or thinks he’s open, but not getting the ball).

It’s self-evidently frustrating to believe you’re in a position to make a play but not get the opportunity. But that’s something that’s built into the wide receiver position. Your job is to run routes and unless you’re really bad at your job, you’re going to run a lot of great routes that get you open but not get you the ball. How you handle that can determine how long and how successfully you play in the NFL.