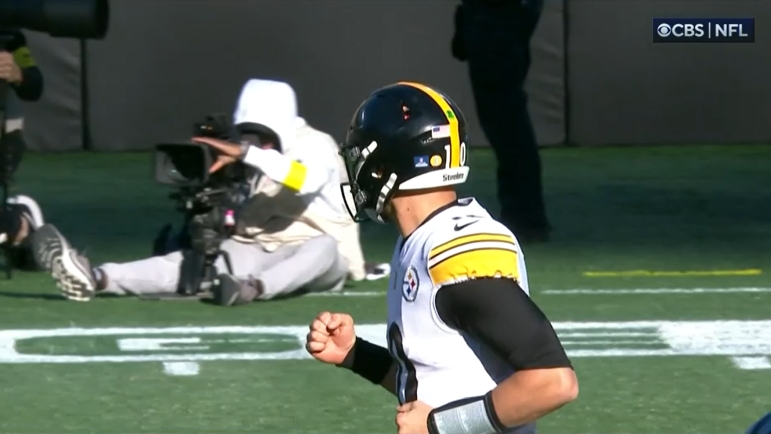 Reasoning: Although his relief appearance against the Tampa Bay Buccaneers earlier this season was admirable, Mitch Trubisky’s start on Sunday against the Carolina Panthers was the best that he’s looked in a Steelers uniform.

The Pittsburgh Steelers didn’t put too much on the quarterback’s plate in their game plan on Sunday against the Carolina Panthers. Their intentions certainly seemed to be to run the ball down their throats. By and large, they did a good enough job of that to get the win while taking the air out of the ball.

But quarterback Mitch Trubisky stepped up whenever it was needed of him, and he made the most of his shots when they were called, including a 38-yard beauty down the sideline to George Pickens, which, minus a 22-yard jet sweep by Steven Sims, was their only explosive play of the game.

Trubisky in particular had a real connection with wide receiver Diontae Johnson. He only attempted 22 passes on the day, but completed 17, going 10 for 10 while targeting the fourth-year man. They didn’t find the end zone but they did move the chains early and often, frequently on possession downs.

He didn’t have a touchdown pass, but he did run for one, and the offense got into the end zone three times in total, scoring 24. For the Steelers’ standards this year, that is more than acceptable. They’re 5-2 when they score 20-plus points on the year.

While there was a turnover-worthy play or two mixed in—including one where the pass was tipped near the line of scrimmage—overall it was a strong day for the quarterback, who needed a serious bounce-back effort after throwing three interceptions a week earlier.

I don’t think there will be a conversation about who will start once Kenny Pickett is ready to get back on the field after missing Sunday’s game due to a concussion, but Trubisky did provide some comfort to those who make the decisions about his ability to be the backup and to make plays when needed.