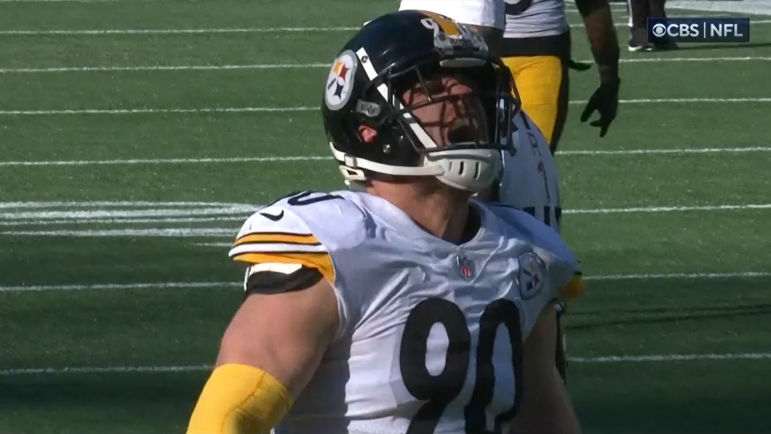 Reasoning: Playing his best game since returning from injury, T.J. Watt not only performed quite well but also made a little bit of NFL history by becoming the third-fastest player in NFL history to record 75 sacks in a career.

For context, the Steelers only have two players who, in the history of their organization, recorded 75 or more sacks in the black and gold. At least they only had two before yesterday. First it was Jason Gildon, who owned the team’s sack record for a number of years. Then James Harrison broke it.

Quick side note: Yes, unofficially, Joe Greene and L.C. Greenwood both recorded 75-plus sacks during their time in Pittsburgh, but sacks did not become an official statistic until 1982. Keith Willis was their first great sack specialist in the sack era.

But officially or unofficially, they all step to the side slightly to make room for the man who will undoubtedly not only break but shatter the team record eventually: T.J. Watt, who recorded sack number 75.5 yesterday (and then split for 76) in Carolina in just his 84th game played. Only Reggie White and big brother J.J. Watt did it faster, the latter in 83 games.

The beauty of the fact that T.J. hit that number yesterday is that it was also an all-around very good game for the reigning NFL Defensive Player of the Year, a title which due to injury he has no shot of defending this year.

He finished the game with only two tackles, one of which was for a loss, but his impact was bigger than that, and it’s less surprising when an edge defender has lower tackle numbers in a game in which the opponent was forced to throw the ball heavily.

Watt’s record sack came about 20 minutes into the game, and it was a timely one, bringing down Panthers quarterback Sam Darnold for a loss of nine on 3rd and 10. He then split a sack with Cameron Heyward (who himself is now up to 74.5 sacks with a 1.5-sack game of his own) on 3rd and 4 from the Steelers’ four-yard line for a loss of 10, forcing the Panthers to settle for a field goal in an 11-point game with under half a quarter to play.

Watt is long past talking about statistics and personal achievements. The only thing you’ll get him to say about his goals as an individual performer is that his mission is to be a game wrecker. Third-down sacks, especially in the red zone, seem like a pretty good way to go about doing that.