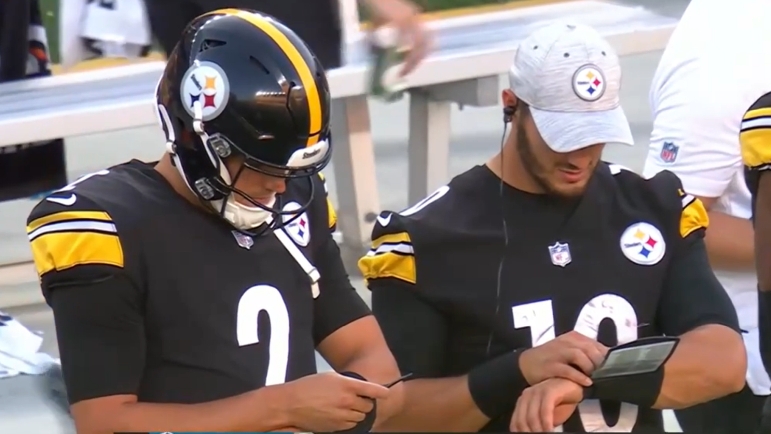 Question: Would you rather see Mitch Trubisky or Mason Rudolph start if Kenny Pickett misses time?

After Mitch Trubisky came off the bench and threw three interceptions on Sunday, the Steelers stuck the cameras in front of third-string quarterback Mason Rudolph—which begs the question of whether or not there is an opportunity for a shakeup in the hierarchy.

Kenny Pickett is currently in concussion protocol after suffering his second concussion of the season on Sunday. It is unknown if he will be medically cleared to play in time for the Steelers’ next game at this stage, which means we could very well have somebody else starting under center.

Until told otherwise, I’m operating under the assumption that that is going to be Trubisky. And I don’t expect that we’re going to be told otherwise. But we can still have a discussion about what we might like to see the Steelers do, whether or not they actually do it.

I’m going to try to steer clear of injecting my own thoughts into this discussion, but the premise is simple: if Pickett can’t play next week, who would you put out there, Trubisky or Rudolph?

Trubisky opened the 2022 season as the Steelers’ starter for the first four games, but head coach Mike Tomlin made the decision to pull him at halftime in week four as the offense continued to sputter and struggled to move the ball.

Pickett has started every game since, but Trubisky has made two extended cameo appearances since then due to the rookie suffering in-game concussions. He looked much better in his first appearance off the bench, playing more aggressively and pushing the ball down the field.

He played more aggressively Sunday as well and was able to move the ball, but he did throw three interceptions, saying after the game that he was overly aggressive and that he needed to use his eyes better to manipulate the defense.

Rudolph was the backup to Ben Roethlisberger for the previous three seasons but has not been active for a game this year. He started one game last season, drawing with the Detroit Lions. He has a 5-4-1 record as a starter with a 16-11 touchdown-to-interception ratio.