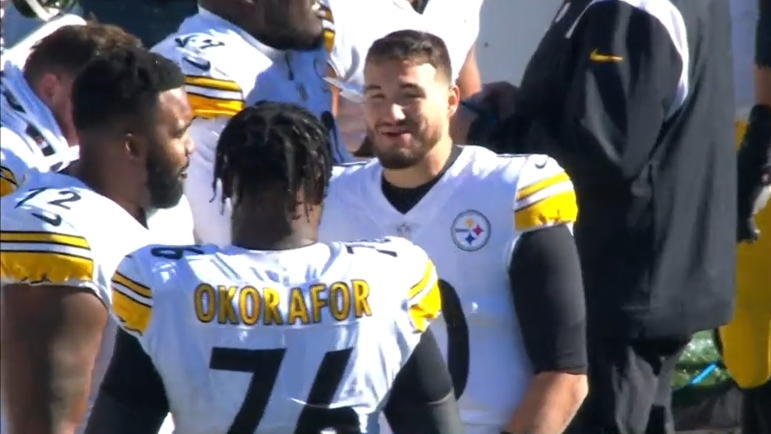 Question: Did Mitch Trubisky just buy himself another year on the 53-man roster?

The veteran quarterback has now made three appearances in games since he was first benched back in week four. He’s looked very good in two of those appearances, and the other was a mixed result with some devastating turnovers in between otherwise efficient offensive possessions.

It’s been a fairly different showing overall in comparison to the first four games of the season while he was the starter. How much of that was him feeling pressure from Kenny Pickett, and how much of that was a young offense needing to grow—including around him? Either way, again, outside of the egregious turnovers last week, he’s looked much better when he’s been on the field as a backup.

Which raises the question: will he be back next year? There’s a fair chance he’s already played every down of football in 2022 that he’s going to, so we may already have the entirety of his body of work from this season upon which to judge.

Trubisky is scheduled to earn a base salary of $8 million next year. That’s actually not an outlandish figure for a quality backup quarterback, and having a first-round starter under his rookie contract makes it a much easier pill to swallow.

Mason Rudolph will be an unrestricted free agent in 2023, and it doesn’t seem likely he will have any motivation to return to Pittsburgh—unless the Steelers release Trubisky and he fails to get a tempting offer elsewhere in free agency.

They have to have somebody as a backup, and if they don’t keep Trubisky, that would just mean spending resources on the position elsewhere. By keeping him, you have a guy who is already immersed into the system—although we may very well have a new system next year—with chemistry with the guys on the field.

I think it’s a conversation worth having (aside from the obvious fact that we have no say in the matter). Has Trubisky shown enough to justify being retained as an $8 million insurance policy—a policy for a young, still-proving-himself starter who has two concussions under his belt already? What do Mike Tomlin, Omar Khan, and Andy Weidl think?