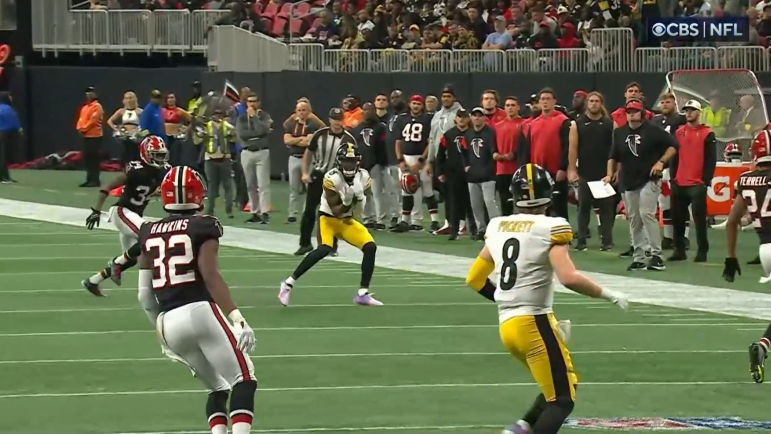 Every rookie season is a learning curve for any player at any position. No matter how talented you are or how much accumulated knowledge you have, there is no way to fully prepare to move from the college level to the pros without experiencing it firsthand and going through a season.

That’s very much what we’ve seen from Pittsburgh Steelers rookie quarterback Kenny Pickett, even though he’s had a more comfortable situation than most rookies. After all, he’s spent the past five seasons playing in the same stadium and even interacting as a college player with some who would become his coaches and teammates today by being at the same facility.

One thing for which there is no replacement is the process of building chemistry, however, and they can only come through work and repetition. Pickett didn’t get that time in this offseason with many of the starters, working as the number three, so he’s had to find ways to get that time in now—with a little help from his friends, such as wide receiver Diontae Johnson, with whom he has a growing rapport.

“The more reps you get with a guy, the more comfortable you feel,” he said of his progressing relationship with the fourth-year receiver as they get more time together, via the team’s website. “‘Tae does a great job of working with me on the side and helping me get those extra reps with him so I feel great every time I walk out there that 18 will be where I need him to be.”

Leading up to the bye week, Pickett was just 21-of-39 targeting Johnson in five games for 172 yards. Since then, in the same number of games, he is 23-for-36 for 257 yards. That includes small but not insignificant progress on third and fourth down. The two attempted to connect 12 times before the bye on possession downs, succeeding only twice. They’ve only attempted five connections since then, but have connected on two of them.

Johnson signed a two-year contract extension this offseason, so he and Pickett should be together for at least the majority of the latter’s rookie contract. That’s plenty of time to build a rapport, but the sooner it comes, the better.

It will also help to have second-round rookie George Pickens around for all or most of that duration as well, as their relationship continues to grow. The new duo hooked up for a game-winning touchdown on Saturday, becoming just the fourth rookie-to-rookie connection to score a game-winner with two minutes to go in regulation or less in the Super Bowl era.