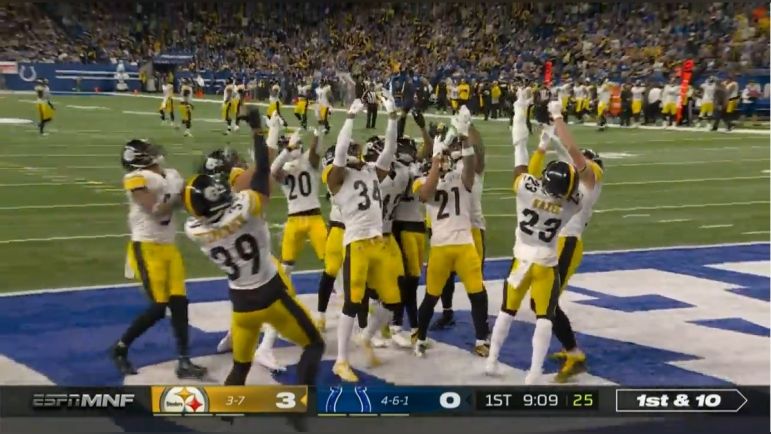 One turnover led to plenty of lighter bank accounts. A whopping 13 Pittsburgh Steelers’ players were fined for their end zone turnover celebration in the team’s Week 12 win over the Indianapolis Colts. Per The Trib’s Chris Adamski, the fine layout is as follows.

Several others were fined separate amounts. They include S Tre Norwood ($4,715), CB James Pierre ($4,989), S Damontae Kazee ($6,597), CB Arthur Maulet ($8,528), EDGE Alex Highsmith ($6,495) and EDGE Malik Reed ($8,333). As Adamski notes, those lower figures are levied to those who make less money, allowing the fines to be more proportional to their game checks. Still, it’s a serious amount of money for several of these players on cheap contracts and that’s before considering they lose roughly 40% of that to taxes.

The celebration occurred after James Pierre’s interceptions of Colts’ QB Matt Ryan on the Steelers’ first defensive stand of the game. Pierre and a large chunk of the defense ran into the end zone to celebrate, as they normally do, with choreography that mimics shooting a gun at the football thrown high into the air. Here’s a look at the moment.

It’s something the team has done dating back to training camp. They’ve also done it in-game, like Week One against the Cincinnati Bengals, but took that celebration to the sideline. By doing it on their bench as opposed to the playing field, they avoid the fine. Here, you can see Watt instruct his teammates away from the field to celebrate. That didn’t happen against the Colts hence the fine.

Love the Steelers turnover celebrations. Been doing it all camp. Hoping this isn't T.J. Watt's last one of the season. #Steelers pic.twitter.com/V9Amr4Psq3

All fines go to a charity of the NFL’s choosing. Fines are preset amounts agreed to in the CBA that go up a designated percentage each year.