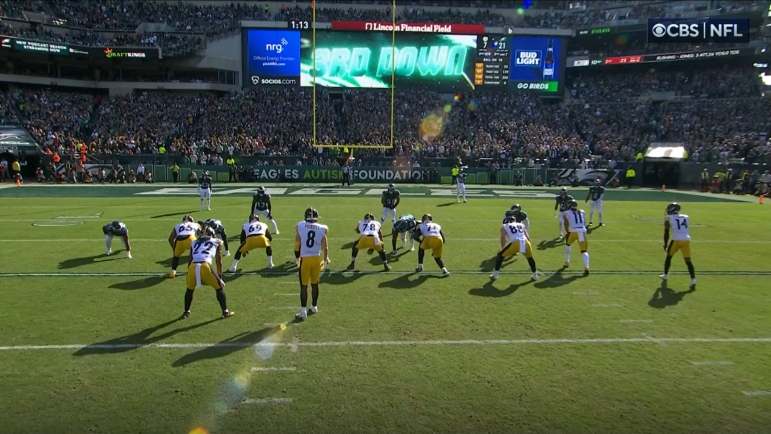 The Pittsburgh Steelers have struggled in the red zone so far this season, and rookie quarterback Kenny Pickett hasn’t been very good inside the 20-yard line either. If the Steelers want to get back into the playoff hunt, they will need to get better at scoring six inside the red zone, and that starts with the quarterback.

Part of the reason for Pickett’s struggles, and subsequently the team’s struggles, in the red zone is how fast the game moves. Speaking to the media today, transcribed via the Steelers,  offensive coordinator Matt Canada discussed Pickett’s struggles inside the 20-yard line and said that the speed of the game is likely the cause of it.

“I think he’s mentioned it to me and probably to you guys – I don’t know what he says to you all – but the game’s fast” Canada told reporters via a team transcript. “It’s the National Football League. You’ve got to get it out of your hand quicker. You’ve got to see it quicker.”

The NFL is much faster than college, and it is why rookies, especially rookie quarterbacks, often struggle in the first year of their career. Great players can struggle adjusting to the speed of the NFL. A great example is Peyton Manning, who struggled a lot in his first year at quarterback, but once the game slowed down he became one of the all time greats. Now I am not trying to say Pickett will be Manning, in fact I highly doubt it, but the point remains that struggles in the first year due to the speed of the game are the norm.

This past Sunday the Steelers went 2-5 in the red zone, scoring two touchdowns that ended up being crucial in securing victory for Pittsburgh. Canada, though, while acknowledging that the Steelers improved near the goal line, still was not satisfied.

“I think we played better last week, but he’s [Pickett] got to continue to make those throws that end up being touchdowns and not field goals. We’ve just got to continue to get better down there, all of us. But certainly, I know Kenny, to your question here, has some throws he’d like to have back.”

If Pickett was able to lead the Steelers to just one more touchdown on their red zone opportunities they would have blown the New Orleans Saints out. Pickett missed a couple of throws to the end-zone that stalled out drives, and he also got bailed out on a throw to Pat Freiermuth in the end zone that was called as a pass interference penalty which could have gone either way.

Canada is certainly right that Pickett has to make those throws in the red zone. However, it is just a lot harder inside the 20-yard line as the amount of space shrinks, leading to everything moving so much faster. This is not trying to excuse Pickett’s performance by any means, but it is just an explanation on why he struggles much more in the red zone. As the game slows down for Pickett, expect him and the Steelers to improve in the red zone, which will lead to more victories.