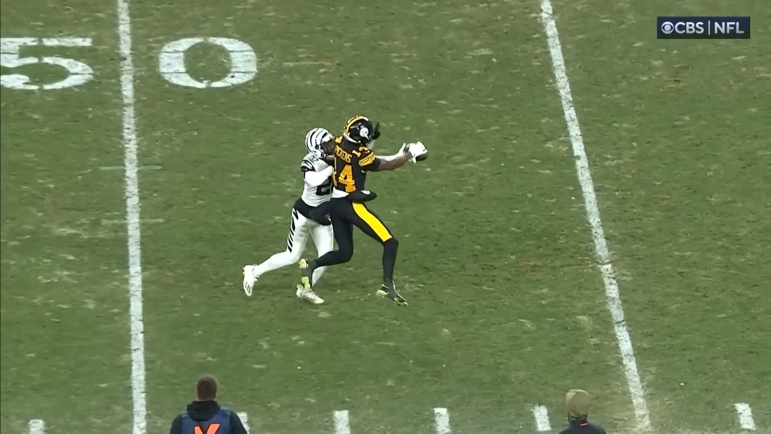 When Tomlin was asked about WR George Pickens and what he specifically seen in terms of growth in his rookie season, Tomlin provided a wide viewpoint of the improvements Pickens has made this season but is excited to see how much he can improve as he gets more exposure as a bigger part of the offense moving forward.

“Just to continue growth in all areas,” Tomlin said to the media Tuesday on video from the team’s YouTube channel. “Nuances of the game, situational play, fundamentals, things specific to his position, releases, route running, hand selection. There’s a lot of meat on that bone. He’s a very talented guy and he’s making plays along the way, but it’s reasonable to expect his growth and maturation to continue and really to continue at an accelerated rate as he logs snaps and gains experience and learns from those.”

Pickens again made an impact in Pittsburgh’s most recent game against the Bengals, reeling in four-of-six targets for 83 yards and a TD. Pickens again showed off his phenomenal catch radius and body control along the sideline, making a highlight reel 33-yard reception in contested coverage in the second half after catch a wide-open TD in the right corner of the end zone before halftime.

Still, Tomlin is correct when saying that there is plenty of meat left on the bone with Pickens who was in-line for an even bigger day at the office but dropped a wide-open TD down the left sideline and had the chance at another deep bomb TD catch from QB Kenny Pickett, but lost track of the football in the air as he stumbled and had the ball fall just in-front of him.

While Diontae Johnson may be the WR1 for all intents and purposes in Pittsburgh, Pickens has performed more like the Steelers’ WR1 thus far in 2022. He has plenty to work on in terms of consistently generating separation and finishing plays like the one shown above, but he has the size, athleticism, and body control that you just can’t teach at the position. He’s just scratching the surface of what he is capable of in an offense that Bengals LB Germaine Pratt said run the same plays over and over again, but still is making plays when a receiver like Johnson has struggled to do the same.

You want your WR1 to be matchup proof and scheme proof, being able to produce regardless of the situation around him. While Johnson has seen more of the top coverage from opposing DBs, it wouldn’t be a surprise to see opposing defenses start committing more attention to Pickens in the coming weeks as he looks the part of a promising rookie receiver that has a chance to breakout in 2023 should the environment of the Steelers offense improve over the offseason.