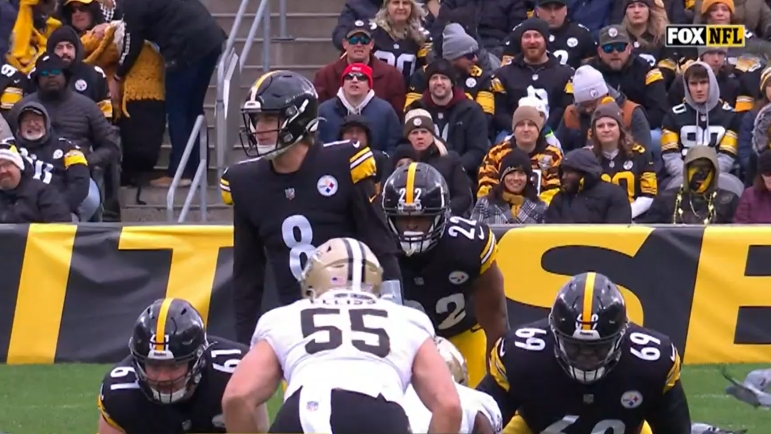 Six games into his NFL career Kenny Pickett has had to deal with quite a bit offensively for the Pittsburgh Steelers, some of which has largely been out of his control.

That continued Wednesday thanks to the Pittsburgh Post-Gazette’s Gerry Dulac. In his weekly Steelers chat with fans, Dulac was asked if Pickett was allowed to audible at this point in his career. Remember, former starting quarterback Mitch Trubisky dealt with the same questions and was essentially not allowed to audible.

On film, Trubisky never really checked out of plays or changed routes or protections, which lined up with the belief that he wasn’t allowed to audible or check plays. Dulac stated Wednesday in his chat that Pickett, too, wasn’t given the authority to check or audible offensively.

Taking a look at the film, and simply watching his six games, that’s just not true regarding Pickett and his ability to change things on the fly on the field. Since stepping into the lineup after halftime against the New York Jets, Pickett has been checking plays, changing routes and protections, and more on the field on the fly.

Sometimes, it’s gotten him into trouble with the play clock, leading to penalties.

Another area for Kenny Pickett to work on. Learning you can't get away with last-second changes. Times where you just have to roll w/ the call.

Still, Dulac made that comment Wednesday in his chat, which led to second-year offensive coordinator Matt Canada being asked about it Thursday during his weekly media session.

“I think that question has come up. Audibles and checks, we obviously have had checks in our offense forever. There’re times he goes up there and he has to check, run-to-run, pass-to-pass, based on look, based on technique, based on coverage,” Canada told reporters Thursday, according to the official transcript provided by the team. “There’re protection things he has to do. He is a rookie, but it’s the NFL. Certainly, we’re going to try to streamline everything we can for all of our players to get them to play fast and simplify things the best way we can until we can continue to grow and be more diverse, more creative. But that’s not just Kenny.

“Again, we talked about being on the same page. There’re certain things he has to do, obviously, as he evolves and sees things, but Kenny sees the field very, very well. We just have to kind of continue to grow and get the right thing at the right time.”

One of the key traits the Steelers loved about Pickett coming out of the University of Pittsburgh was his overall football IQ and ability to see the field pre-snap, getting his guys into the best position possible to succeed on any given play. While he is a rookie in a relatively new offense and playing at a higher level of competition than in college, it would have been coaching malpractice to put handcuffs on Pickett and take away one of his best features pre-snap.

He’s not up there calling whatever plays he wants like Ben Roethlisberger did in the middle of his Hall of Fame career, but a check is an audible, point blank. Pickett has the authority to check out of something if he doesn’t like the look. All quarterbacks have the authority to do that at the professional level.

Hopefully with Canada’s descriptive answer, the narrative can go away.