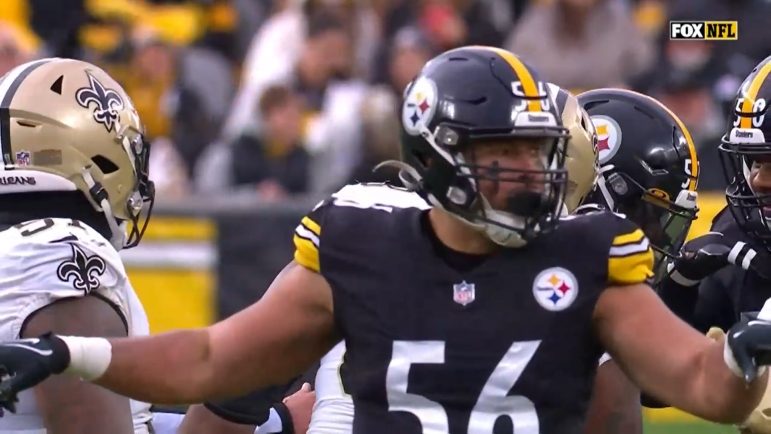 The Indianapolis Colts entered (and exited) Monday night as the most-sacked team in the NFL, as heading into tonight’s matchup with the Pittsburgh Steelers, they allowed their quarterbacks to be brought down a whopping 40 times. With a Steelers defense featuring the likes of outside linebackers Alex Highsmith and T.J. Watt, as well as talented pass-rushing defensive linemen in Larry Ogunjobi and Cameron Heyward, Monday night looked to be an opportunity for the Steelers’ pass rush to feast similar to the way it did in Week 1 against the Cincinnati Bengals when the team racked up seven sacks. It didn’t play out that way though, as the Steelers had just one sack entering the fourth quarter (although they finished with three) in their 24-17 win at Lucas Oil Stadium. Highsmith talked to the media about Pittsburgh’s pass rush after the game.

“We knew we had to just keep compressing the pocket. But we know that we just got to be better. We know that we’re capable of getting more sacks than that. We felt that we were capable of being able to get them off the spot, we just weren’t able to finish,” Highsmith said via the team’s YouTube channel.

Pittsburgh did a good job generating pressure, but they couldn’t get home for sacks. Some of that speaks to play a savvy veteran and former MVP in quarterback Matt Ryan, who while not the same quarterback he was five years ago, did a good job stepping up in the pocket and evading the pass rush to create plays or throw the ball away. Still, with the reigning sack leader in Watt and a defense with a host of guys who can rush the passer, it’s a bit surprising that Highsmith was the only member of the front seven to register a sack (safety Terrell Edmunds and cornerback Arthur Maulet were responsible for the other two).

Outside of Week 1, the Steelers’ pass rush hasn’t been as good as expected. Losing Watt for seven games certainly didn’t help matters, but for a team that’s had 50+ sacks every year since 2017, the fact they only have 32 right now is a little bit surprising. For them to reach that 50-sack total, they’ll need to average three sacks a game in their next six games, which is definitely possible but not even close to a guarantee.

At the end of the day though, the defense did enough to get a win. They did a solid job against Indianapolis’ star running back in Jonathan Taylor, and while they could’ve done better against the pass in the second half, they got the win. Highsmith in particular made some key plays down the stretch, while the outside cornerbacks of Levi Wallace and James Pierre played at a high level. While it would’ve been nice to see the pass rush really get going with a big day today, the Steelers won and the defense had themselves a pretty solid game. That’s really all you could want and ask for.