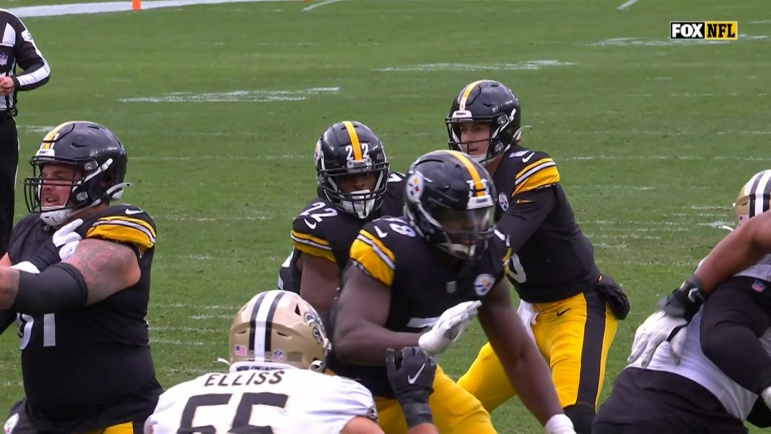 The Pittsburgh Steelers defeated the New Orleans Saints last Sunday due to the success of their run game. Najee Harris, Jaylen Warren, and even quarterback Kenny Pickett contributed immensely to the team’s 217 total rushing yards. It was the first time the Steelers topped 200 yards on the ground since Le’Veon Bell ran for 236 yards himself against the Buffalo Bills in a snowy Orchard Park in 2016.

“I think we stayed committed to it” Tomlin said. “The game didn’t get in such a manner that we were forced to get one dimensional or time became a component of the equation. We converted enough third downs to maintain possession of the ball.”

The Steelers not trailing at all in the game helped a lot in this aspect meaning that the Steelers did not have to try and throw themselves back into the game like in previous outings against the Philadelphia Eagles, Miami Dolphins, and Buffalo Bills.

However, that is not the main reason the run game was so successful. Tomlin mentioned the Steelers’ ability to convert third downs which played a huge part in getting the run game going. The rushing attack is very reliant on getting in a rhythm, and constant three and outs do not allow for the running backs and offensive line to get into a rhythm.

Pittsburgh only had two drives that resulted in three offensive plays of less, a two play drive before the end of the first half, and a drive in the fourth quarter in field goal range that resulted in a Matthew Wright miss. Overall, Pittsburgh went 9-17 on third downs last Sunday, way better than their pathetic 1-12 in their loss to the Eagles two weeks before. In fact, those nine conversions on Sunday set the record for most third down conversions for the Steelers this season, topping their eight from Week Two against the New England Patriots.

If Pittsburgh wants to continue their winning ways and success in rushing the football, they will need to do a better job converting third downs than they did against the Cincinnati Bengals in Week One. In the first game of the season, the Steelers went a measly 4-15 on third down and allowed the Bengals to control the time of possession 43:42-26:18.

With it being highly unlikely the Steelers will win the turnover battle 5-0 again, they will need to have a good run game and sustained offense. Those two go hand in hand, and Tomlin has probably been preaching that this week in meetings and practice. If the Steelers can run the ball successfully tomorrow, they will likely move to 4-6 and keep their slim playoff hopes alive.