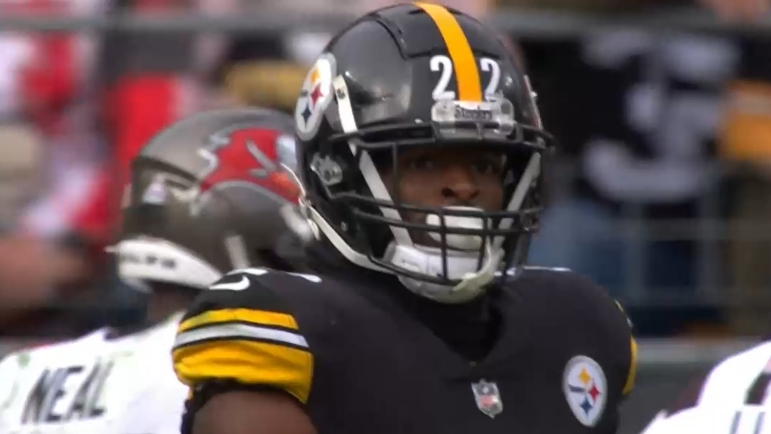 Pittsburgh Steelers running back Najee Harris has taken a step back in his second year in the league, as after a rookie campaign where he led the league in touches and compiled over 1,600 total yards, Harris has yet to break 100 total yards in a game once this season. Steelers running backs coach Eddie Faulkner talked about the importance of keeping Harris from trying to do too much.

“It’s just a constant conversation,” Faulkner said via a video posted to Steelers.com. “He wants to do well. He wants the team to do well. It means a lot to him. Nobody cares more than that dude. And so when that’s the case, you’re always continuing to remind him, we just need you to be yourself. We just need you to do what Najee Harris is capable of doing and cleanse yourself of any other baggage you’re toting,” he continued.

It’s clear that Harris is a talented running back and has the potential to be one of the top backs in the NFL. It’s why the Steelers spent a first-round pick on him and he flashed a lot of that potential last year. For whatever reason though, he hasn’t been the same this year.

There’s a handful of things that could explain Harris’ struggles this year. The two most obvious are the Lisfranc injury that he suffered in training camp and that lingered into the regular season, with Harris playing with a steel plate in his shoe for the first five weeks of the season. The second is the fact that the offensive line hasn’t been great when it comes to run blocking, and as a result, it’s been hard for Harris to find holes.

Those are the two most obvious reasons that could potentially explain his decline, but you also have other factors that might not be as obvious. Harris is a team captain this year, and he might feel the need to make a bigger impact and do more on the field than he did last year when the team had a clear leader on offense with Ben Roethlisberger. With Mitch Trubisky and now rookie quarterback Kenny Pickett under center, Harris might feel as if he has to do more than he has and perform above and beyond for the Steelers to win. It could explain plays like this one last Sunday, where instead of charging ahead for an easy first down, Harris tried to juke his away around defenders for what he probably thought could’ve been a bigger play.

Obviously, any reason is purely speculative, but it’s true that Harris has to be better. I’ve seen more I’ve liked out of rookie running back Jaylen Warren than Harris this season, and at this point in the year, I thought Harris would’ve turned a corner from his early-season struggles. That hasn’t been the case though, and you have to wonder if he’ll turn it on at all this year. If he continues to play the way he has through the end of the season, there are going to be serious questions about whether or not the Steelers wasted a first on Harris when they had other glaring needs, like in the secondary and along the offensive line.

I’m going to stay optimistic and put it on record that I believe Harris will turn it around. As Faulkner said, he wants to win more than anyone, and his attitude belies that. He’s shown he has the ability to be a very good running back in the NFL, and I think the injury coupled with the below-average run blocking has been a serious hindrance. At some point though, I think Harris is going to have a big game and then carry that momentum with him and break off a few in a row. It might be blind faith, but I have faith in the second-year running back.