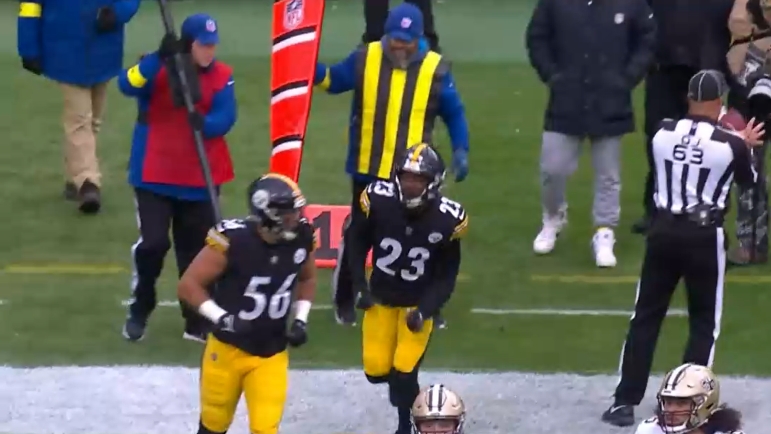 Pittsburgh Steelers safety Damontae Kazee made his season debut for Pittsburgh during the team’s Week 10 win over the New Orleans Saints, and he made his presence felt by intercepting Saints quarterback Andy Dalton in the fourth quarter. Outside linebacker Alex Highsmith offered praise for Kazee after the game, per a tweet from Chris Adamski of TribLive.

Alex Highsmith on what the debut of Damontae Kazee meant to the Steelers D pic.twitter.com/J3Q6x2tcKy

“We know the type of player [Damontae] Kazee is. Before he got hurt in the preseason, he was balling, he’s been in the league for awhile,” Highsmith said. “We have the utmost confidence in him being back there, the play came his way today and he was able to make it.”

Kazee was expected to be the team’s third safety, but after Minkah Fitzpatrick had to undergo an appendectomy yesterday, he took over Fitzpatrick’s role and started alongside Terrell Edmunds. He had four tackles, including three solo, and the interception on Dalton that led to Pittsburgh’s second touchdown of the game and the one that gave them a comfortable 20-10 lead in the fourth quarter.

Earlier this week, Kazee said that when the defensive backs got their hands on the ball, they had to make the play on it. Kazee, who led the NFL in interceptions back in 2018, showed that he could. For a defense that’s lacked splash plays in recent weeks, for Kazee to come in and force a turnover in plus territory was huge for the Steelers. Levi Wallace came up with a turnover later in the game that essentially sealed the game for Pittsburgh, but Kazee’s was super important as it led to a touchdown on the very next drive to make it a field goal game to a two-score game.

Even when Fitzpatrick returns, Kazee will still have a role on this team. He wasn’t perfect today, as he had a bad unnecessary roughness penalty in the first half, but he’s a guy who can make plays on the ball and the team can run three safety looks with Kazee along with Fitzpatrick and Edmunds. That formation looked to be an effective one in the preseason, and hopefully, that will carry over into the regular season.

I’m excited to see what this defense looks like fully healthy when Fitzpatrick is able to get back in action. The return of T.J. Watt today did a lot for Pittsburgh’s run defense and ability to get to the quarterback, even if Watt wasn’t able to do so himself, and this unit could return to form as being one of the league’s best with Fitzpatrick back in the fold as well.