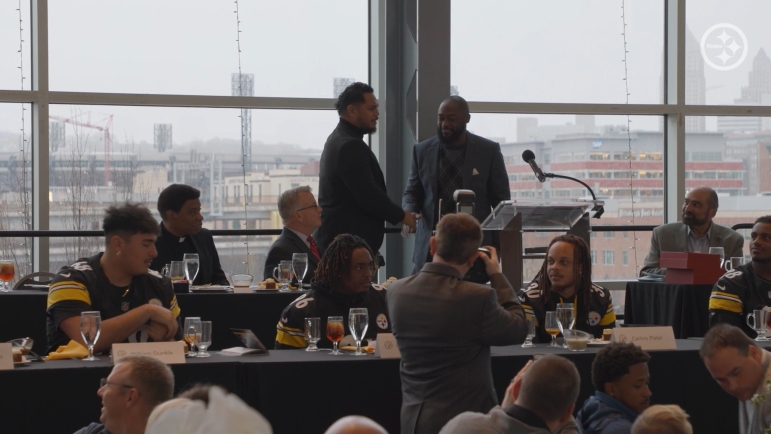 While they say it’s a business, football is more than just a job for probably just about every player who makes it to the NFL. Having the game taken away from them, even if only temporarily through injury, can be as emotionally trying as it is physically, something 35-year-old Tyson Alualu experienced last season for the first time.

Recipient of the Ed Block Courage Award yesterday in respect for his ability to return to play this season after missing most of the year with a fractured ankle, he talked about not so much the physical battle that he went through to get back, but the mental, even if he admitted he is still working through the former.

“You don’t want to be in the position where you have to battle back and fight through something like this, whether it’s a situation you were in or an injury. In my case it was the injury,” he said, via the team’s website. “It was a good time to reflect back on the road, the journey that I am still on trying to bounce back.”

It hasn’t all been smooth sailing. A bothersome knee issue caused him to miss most of the offseason, in fact, and once regular season play commenced, he soon found himself demoted from his starting nose tackle role in favor of Montravius Adams—who was picked up off of a practice squad last year to replace him.

Any adversity can cause you to question your motives for doing what you do. It’s something Arthur Maulet brought up weeks back after the blowout loss to the Buffalo Bills. He challenged teammates, he said, to “find your why”, the reason, deep down, that you play, that you want to play. Injury caused Alualu to reflect on the same question.

He talked about faith and family, but also outreach. “The longer you play this game the more those things mean,” he said. “There is so much more to it now. It’s the love for the game and the people I get to do it with.”

There’s a very good chance that this is Alualu’s final season in the NFL. He was committed to returning from injury this year because he didn’t want to end his career that way, but he was also helped by the fact that he was already under contract.

Unsigned for 2023, having experienced a demotion, and with an unclear market for an interior defensive lineman set to turn 36 years old, it may be the moment he decides to take the opportunity to move on to his life’s work. And I have no doubt that he will find it, if he doesn’t already have it in mind, as others like Vance McDonald have.