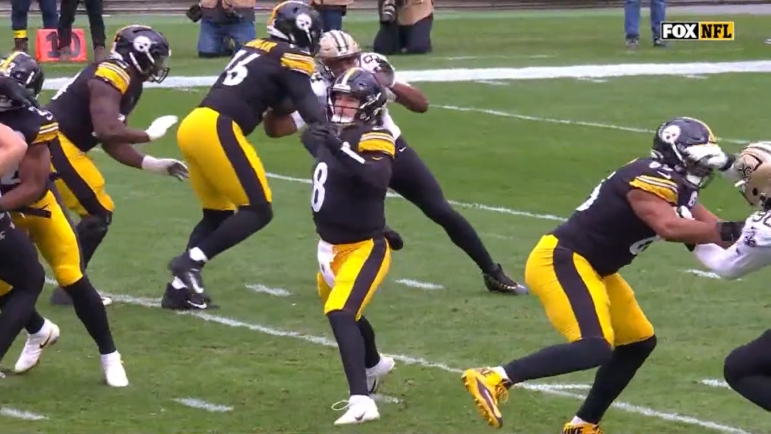 In a game between two offenses who have struggled throughout the season, the winner of the game between the Pittsburgh Steelers and New Orleans Saints was likely going to be whoever won the turnover battle. With rookie quarterback Kenny Pickett, who has 8 interceptions this season, going up against a defense with the likes of Tyrann Mathieu and Cameron Jordan, it would’ve been reasonable to expect him to turn the ball over, even though the Saints only have two interceptions all year. Instead, Pickett, while not playing great, was able to avoid turning the ball over, which earned him praise from head coach Mike Tomlin in his postgame press conference.

“We took care of the ball. As a young quarterback in competitive circumstances, that’s a difficult thing to do. We don’t discount his ability to do that. You take care of the ball, you give yourself a chance to win and you make yourself a tough group to beat. So it started there for us,” Tomlin said after the game via Steelers.com.

Pickett finished the day 18-30 for 199 yards with a rushing touchdown while also tacking on 8 carries for 51 yards. He wasn’t the best through the air, as he missed some throws he probably should’ve made and struggled in the pocket against pressure, getting sacked six times and retreating back at times against pressure. Still, as Tomlin said, he didn’t turn the ball over, and the Steelers won the turnover battle 2-0. Against the Saints, their 20 points were enough to get the job done.

The Pittsburgh offense today was what I think a lot of people thought it would look like for the team to have a successful season. Quarterback play that does just enough to move the sticks at times and not turn the ball over, and a run game that bleeds clock and is able to keep churning forward and picking up yards and first downs. It was the first time all year that the run game really looked successful, and despite Pickett not playing as well as the Steelers may have liked, the offense as a whole did enough to get the job done.

Pickett also looked better in the second half than the first, showing improvement as he got more comfortable reading the Saints defense and assessing their pressure. As a rookie, you just want to see progression throughout the season, and sometimes you can see that progression happen throughout the course of a game. I thought Pickett did a good job in the second half managing the game and making the throws he had to.

This offense still has yet to put up 21 points in a game, and against the Bengals next week that’s a threshold they’ll probably have to cross if they want to win. But today, 20 was enough, and Pickett’s ball security was certainly a huge plus for the Steelers as they relied on their run game and defense to help them pick up their third win of the season.