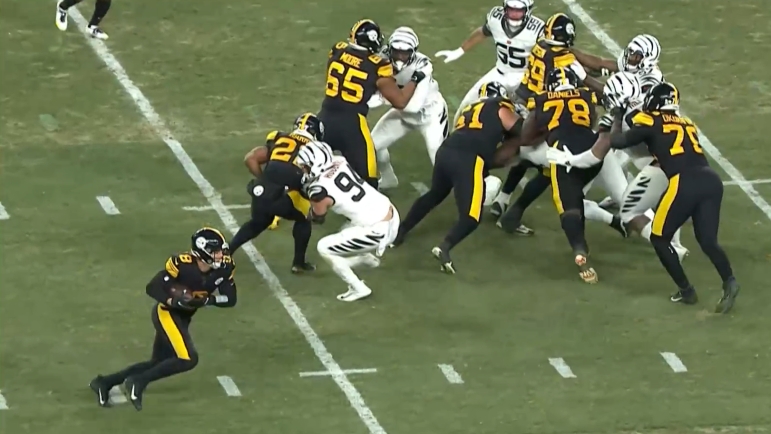 Though the Pittsburgh Steelers did not come out of Week 11 with the desired outcome, the team’s offense undoubtedly made strides. From scoring a season-high 30 points to seeing consistent improvement in the run game, this was arguably the best outing for the Steelers’ offense in 2022. When asked whether the offense took a step towards the right direction, quarterback Kenny Pickett was cautiously optimistic, doubling down on the fact that winning is the bottom line.

“I think we have definitely taken a step in the right direction,” Pickett said when asked about the offense during a Wednesday press conference according to Steelers.com.”But the ultimate goal is to win. That’s where we have to figure out and do whatever we have to do to get that final result. Because we could talk about progress, and that we’re heading in the right direction, but that’s all that matters.”

The Steelers’ offense indeed took a massive step in the right direction. The team rushed for over 100 yards for the third straight game, and Pickett had one of his best starts to date. After ranking dead last in the NFL through Week 8, they now rank 28th after two strong post-bye week showings.

However, as Pickett said, winning is the bottom line. While the team improved offensively, there was no way to go but up from their dead-last ranking. Not to mention, their offensive performance against the Cincinnati Bengals was far from perfect, especially in the second half. That is, after a strong first half showing, the team punted on their first three offensive drives in the second-half, allowing the Bengals to take the lead and never give it back. Outside of a field goal that ensured a T.J. Watt interception and a touchdown in their final garbage time drive, the Steelers’ offense got virtually nothing going in the second half.

When asked what changed for the Bengals’ defense the second half, linebacker Germaine Pratt indicated the Steelers’ repetitive play calls gave them a head start on most plays. Repetitive play calling is something that many have criticized Steelers’ offensive coordinator Matt Canada for, and Pratt’s comments will certainly not diffuse that fire.

Had the Steelers scored or held the ball longer on at least one of their first three drives in the second half, we are likely looking at a different game. The team’s offense went head-to-head with quarterback Joe Burrow and company in the first half, taking a 20-17 lead. However, that effort was ultimately meaningless.

As demoralizing as the loss was, there is no doubt that the offensive execution and play calling are drastically improving. Going into halftime with a lead despite the Bengals scoring 17 points is not something that many Steelers’ fans were expecting, and it’s commendable given prior showings by this offense. The offense came a long way from scoring 3 points against the Buffalo Bills and 10 points against the Miami Dolphins, and it’s something that they can build off. Granted, the team is 3-7 and not exactly a playoff threat. If nothing else, an offensive improvement would be ideal for Pickett’s development and career trajectory.