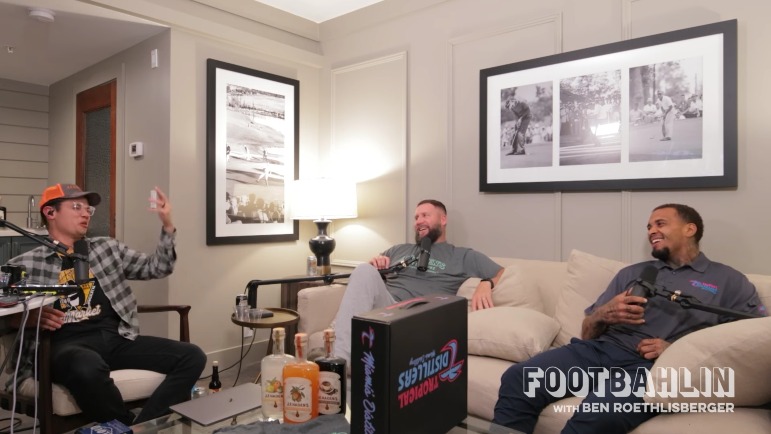 The Pittsburgh Steelers got off to a disastrous start in their 48-37 Wild Card loss to the Cleveland Browns when Maurkice Pouncey’s first snap went over Ben Roethlisberger’s head and was recovered by current Steeler and former Browns safety Karl Joseph. On episode 14 of Ben Roethlisberger’s Footbahlin’ podcast, Roethlisberger and Pouncey discussed the high snap.

“I’m like, in my head I’m like, there’s no way that just happened to me,” Pouncey said. Roethlisberger talked about the standard Pouncey held himself to after bad plays.

“He would hold it so passionately inside that he wouldn’t let go of it. Some people would say ‘move on, move on,’ and not that his play would be affected but I would try and be like ‘hey Pounce, move on, we’re on to the next one, and he would be like. I don’t like that,” Roethlisberger said.

Pouncey said that the rest of that game, he felt like he had to play perfectly. Pouncey didn’t mess up the rest of the game, but it was an ugly night for the Steelers, as Roethlisberger threw four interceptions and the Browns dominated Pittsburgh, capping off a disappointing end to a season that started with a lot of promise of a 12-0 start that ended with five losses in the team’s last six games, including the Wild Card Round. It would also be Pouncey’s last game before he retired to spend more time with his family, which he also touched on earlier in the podcast.

As bad as that mistake was, Pittsburgh didn’t play well enough to win the football game. It sucks that it happened during Pouncey’s last game and is something that is surely ingrained in the minds of Steelers fans, but Pouncey was a five-time All-Pro center and someone who was part of the fabric of the 2010s Steelers. His friendship with Roethlisberger has been well-documented, and it’s truly a shame the two of them couldn’t win a ring together.

After spending the 2021 season with Kendrick Green playing center, the value of a good center can’t be overstated enough. Pouncey was more than that, a truly elite center in an era where there really wasn’t a lot of them. He’ll go down as a legend in Pittsburgh, and it was definitely interesting to hear his perspective on the play and Roethlisberger’s perspective on Pouncey’s attitude throughout his career. His attitude about limiting mistakes and being hard on himself was undoubtedly something that made him as good as he was. Needless to say, Pittsburgh will be hard-pressed to find another center as good as Pouncey was.