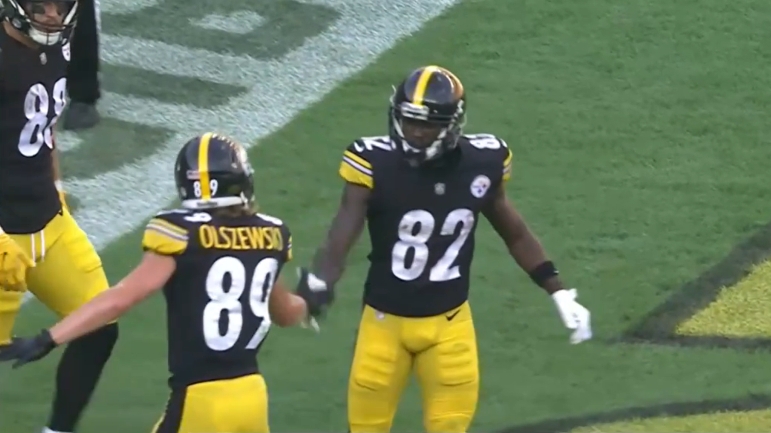 When the Pittsburgh Steelers traded away Chase Claypool, it was obvious the team was losing a chunk of its receiving room. Even though it was the right move to make, one that’s only looked better in recent weeks, there wasn’t much in the slot behind Claypool who himself wasn’t a natural slot receiver and oh man, has it shown.

In the two games the Pittsburgh Steelers have played post-Claypool, they’ve gotten nothing from the slot. The top two names, Steven Sims and Gunner Olszewski, have sure gotten their cardio in. Lots of routes, lots of snaps, but very little production.

In those two combined games, Sims and Olszewski have played 117 total offensive snaps and run a combined 70 routes. Their production looks like: four receptions for 58 yards on eight targets along with three rushes for -1 yards. Numbers that on the surface are bad enough. They get even worse when you consider two of those receptions and 39 of those yards came in the final 1:36 of the Bengals’ loss, Olszewski grabbing a couple of semi-garbage time receptions, including a wild one-handed catch that should’ve been intercepted. Take that away and you’re left with two receptions for 19 yards and negative one rushing yards.

In other words, absolutely nothing. Sims and Olszewski are out there but providing the offense very little. The slot receivers are a black hole, where light and production goes to die.

At this point, Pittsburgh has only two viable receivers in the wideout room. George Pickens and Diontae Johnson with Johnson being limited and taken away by defenses in recent weeks, perhaps in part due to the lack of attention needed to cover the slot. Granted, there’s TE Pat Freiermuth, the best and frankly, only threat between the numbers, but failing to have a slot receiver for an offense that runs 11 personnel a large chunk of the time, 69.2% of the snaps over the last two weeks in games the Steelers have led/been closely behind, is an obvious issue.

Sims has value to this team. On paper, he fits well into the Steelers’ motion-heavy offense and his usage there has occasionally been able to expand and displace linebackers to open holes in the run game. And combined with good scheme and a bit of space, he can make plays. He’s a solid and explosive return man and can be a #5 receiver on the roster. Just not a #3. And OIszewski? I’m not even sure what he does anymore. No longer a return man, he plays some special teams as a jammer on the punt return team, is seeing offensive snaps, but that’s about it. Miles Boykin at least has value as a top-end special teamer, though he’s caught just one pass on the year.

Some of that can be blamed on scheme. Those guys, Sims especially, have come down with Ray-Ray McCloud-itis. The Steelers refusing to use him as a route runner and actual receiver but “gadget” guy who runs everything within five yards of the line of scrimmage. Flares and screens and jets. In 2020, McCloud’s ADOT – average depth of target – was an incredible -1.5 yards. On seven targets this season, Sims sits at just 2.6. Of the 171 receivers with at least five targets this year, Sims’ ADOT is 169th, only ahead of Cole Beasley and Laviska Shenault. Those McCloud-like body types don’t have to be so limited. McCloud is in his first year with the 49ers and has an ADOT of over ten yards, a far more respectable 80th in the league.

Of course, it would’ve been nice and ideal to see 4th round rookie Calvin Austin III on the field. But foot injuries have derailed his rookie year and put some of his future in doubt. Could he bounce back in a big way in 2023? Sure. But it’s hard to put much trust into that.

What’s painfully obvious is the need for the Steelers to draft a true slot receiver. Austin aside, and there’s been no return on him, it’s something they haven’t done in awhile. JuJu Smith-Schuster was initially drafted to play on the outside, remember he was Sammie Coates’ replacement, while the other receivers drafted over the years have- largely been outside guys. Here’s the names from the past decade of draft classes,

And the list goes on and on. Some guys who could sorta do both like Wheaton while Ayers was primarily a returner, but not many true slot receivers. Perhaps their next pick doesn’t have to be a 100% slot receiver, positions have blurred over the years and versatility matters, but someone who can focus and solve that interior problem is critical.

For the rest of this season, the Steelers’ offense isn’t likely to get much out of the slot. If only be sheer volume, one of those guys will make a play in the pass or run game. But it feels like the team is playing with ten men when they’re out on the field and it’ll be one of many reasons why this offense slogged their way through the year.