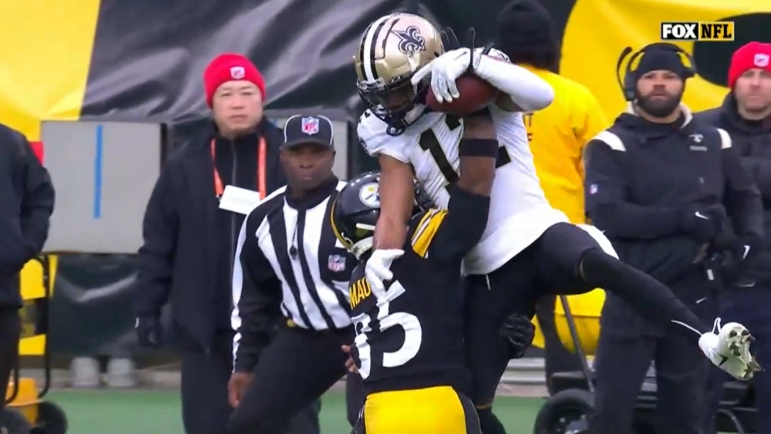 The Pittsburgh Steelers had their best game in passing defense all season on Sunday against the New Orleans Saints, for the first time holding an opponent to under 200 net passing yards. New Orleans finished with just 157 yards and just 10 points, another season low by six points, which saw the defense pitch a second-half shutout.

The biggest factor? Shutting down the deep passing game and keeping the ball in front of them. And they did it without All-Pro safety Minkah Fitzpatrick. Now, he has had a few rough moments here and there in his deep coverage, but it’s surely a coincidence that two of their better games in pass defense came without them.

That’s because the Steelers had two things going for them: strong communication and finishing at the catch point. they didn’t have any interceptions against the Tampa Bay Buccaneers, but they had several passes defensed, some of which saved touchdowns. They were able to finish some on Sunday with turnovers as well, and defensive coordinator Teryl Austin yesterday pointed to those as the key elements behind their most recent showing.

“I think going into last week’s game, we had way too many plays, pass plays, over 20 yards. That was one of our things, to make sure we get those off our resume”, he said via transcript. “I don’t think they had any last week. I think what it really was that the guys got into lab, they looked at the tape, saw what they were doing, figured it out and then worked in practice to make sure they finished those plays in practice. And so, it turned up in the game”.

“I mean, you look at Levi [Wallace]’s play, look at Damontae [Kazee]’s play on the tipped ball because we always talk about how tips and overthrows should never hit the ground”, he added. “Those are things that the guys, I think, just took a conscious effort and really just dove into it because it was something that was hurting our team and they know that we’ve got to have those plays, so it doesn’t hurt our team”.

Wallace alone had three passes defensed, including a tipped ball that led to Kazee’s interception. Arthur Maulet also made a great showing to play through the catch, ripping the ball out of a receiver’s hands for what would have been a big play.

These were the sorts of results that the Steelers weren’t getting earlier in the year, even going all the way back to the week two catch by Nelson Agholor over Ahkello Witherspoon at the end of the first half. More often than not, they have been in position but just finishing the plays.

If they can keep up the communication while finishing on the back end, this can be a much better pass defense than we’ve seen for most of the year. A boost to the pass rush with the return of T.J. Watt doesn’t hurt things, either.