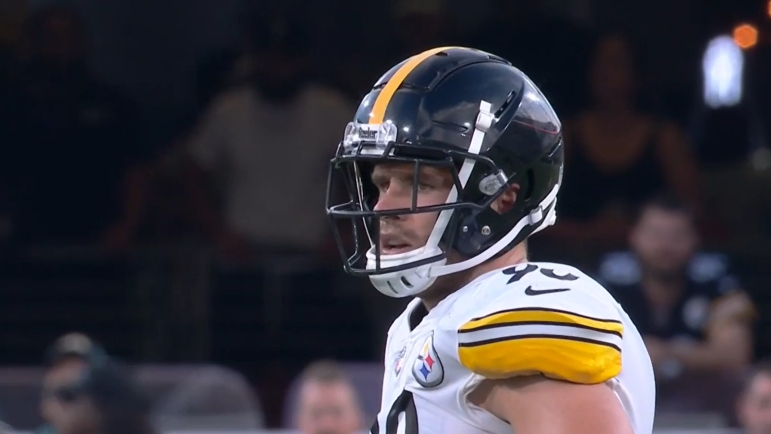 With Tuesday being a player’s day off for the Pittsburgh Steelers, starting outside linebacker T.J. Watt went to McKeesport High School in McKeesport, Pa. to offer words of encouragement to the McKeesport High Football Team, who will take on Armstrong High School on Friday night in a WPIAL quarterfinal matchup. While there, Watt did an interview with Rick Dayton on the Rick Dayton show on KDKA Radio. During the interview, Watt talked about the challenges he faced trying to help out as a coach and his rehab from a torn pectoral muscle he suffered in Week 1.

“It’s a tough situation because I want to help out as much as I can from a ‘coach’s aspect’ but I don’t want to step on any toes. I realize that I just want to play football more than anything and that’s why I’ve been working so hard to get back as quickly as possible,” Watt said.

Obviously, Watt has a lot to offer from an advice and coaching perspective, given that he’s probably the best EDGE rusher in the NFL and a guy who’s a master at his craft. Despite that, it’s a tough line to balance when he’s trying to be more of a coach while unable to play. As accomplished as he is, he’s still a teammate to the guys on the field, and if he tries to do too much coaching it might come across the wrong way. In addition, Watt has to respect what the coaches are trying to teach and trying to say to the guys on the field and not overstep his bounds in that area, either.

With Watt going down and acting as an extension to the coaching staff, he can provide insight in a way that may make things more easily digestible for the guys on the field. Ben Roethlisberger said on his Footbahlin’ podcast a few weeks ago that guys would rather talk to their teammates on the sidelines about what they’re seeing than go and talk to a coach. With Watt being on the sidelines, he can give guys some in-game feedback about what he’s seeing and if there’s anything they can exploit or should be doing differently.

Despite having an extremely high football IQ, Watt adds a whole lot more to this football team as a player than he does as an unofficial coach. The defense hasn’t been as good as it should be without Watt on the field, and his return this Sunday should provide an immediate spark to the Steelers and hopefully help lead them to their third win of the year.