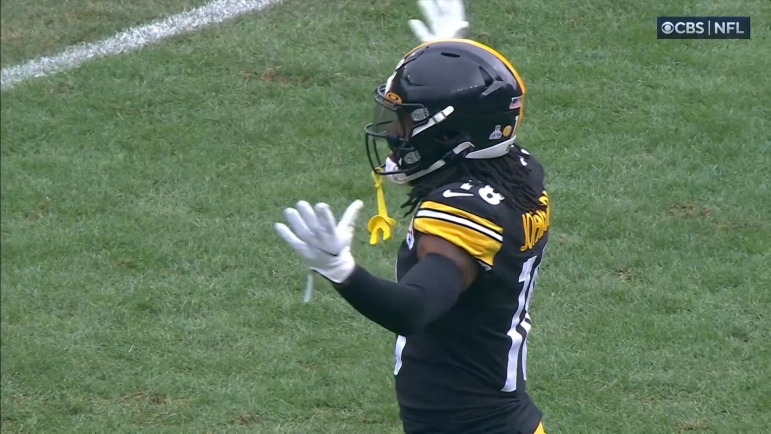 Are you concerned about the 2022 season that Pittsburgh Steelers wide receiver Diontae Johnson is having to date? If so, you are not alone as it is quite obvious that his stats are down quite a bit through ten games played. Not only is Johnson way off pace to equal his totals from 2021 in both receptions and yardage, but his average yard per reception stat is also down two full yards from last season at 8.9. He hasn’t even had a receiving touchdown so far this season. With Johnson’s stats being way off this season, I thought now would be a great time to dig deeper into the reasons why that might be.

I pulled Johnson’s top 10 targets by route stats from Sports Info Solutions as a starting place to examine what his going on with the Steelers’ wide receiver so far this season. You can see them tabled up below.

As you can see in the data above, Johnson’s top three routes by target are the curl, out and the comeback. Those 40 targets account for 46.5% of his 86 total targets for the season. His 29 receptions on those three routes account for 56.9% of his 51 total receptions for the season. Those three types of routes aren’t very conducive to producing yards after the catch as illustrated by Johnson having just 14 total yards gained after making those 29 receptions. By the way, Johnson has just three total receptions via slant routes on seven total targets. Keep that mind as we move forward and also note that he has just four total targets to date on go/fly routes.

Now let’s look at Johnson’s targets by route from the 2021 season.

As you can see in the chart above, Johnson’s top three routes by target in 2021 were the slant, out, screen and the curl. Notice that he had 235 total yards after the catch on slant and screen receptions, which was 43.3% of the 543 total YAC that Johnson registered in 2021, according to Sports Info Solutions. Slants and screens are more conducive to yards after the catch, which is a big part of Johnson’s game, which is running with the football out in space. Also notice that last season Johnson had 15 go/fly route targets with him catching six of them for 231 yards. That 231 yards was nearly 20% of his total receiving yardage in all of 2021. The comeback targets that Johnson had in 2021 didn’t even make the top 10. He had six such targets on that route last season, by the way.

The comparison of these sets of target charts should clearly show that Johnson’s best abilities as a route runner and pass catcher are not being used properly so far in 2022. In short, he’s making catches and getting tackled quickly and thus not registering much YAC in the process. In fact, Pro Football Reference has Johnson down for an average of 1.9 yards after the catch so far this season. In 2021 that stat was 4.9 yards. In 2020 it was 4.5 yards and in his 2019 rookie season it was 5.2 yards.

Here’s a few more stats. Johnson’s average depth of completion stat in 2021 was 5.8 yards past the line of scrimmage. This year it is 6.9 yards, a full yard further down the field. It was 5.8 in 2020 and 6.3 during his 2019 rookie season. So, while he is catching the football further past the line of scrimmage this season, he’s not getting much of an opportunity to do much with those catches because of the routes he’s running on most of his catches.

Personally, I’d like to see the Steelers start utilizing Johnson out in space more and closer to the line of scrimmage moving forward into the remainder of the 2022 season. On top of that, he needs to be used more on deep go/fly routes to allow him a chance to register of few more big plays.

Speaking of big plays, last season, Johnson registered 14 explosive play receptions of 20 yards or longer and those plays totaled 454 yards. Six of those came via go/fly routes and three others came on slant routes. You can see the breakdown of those 14 explosive plays from last season in the table below. 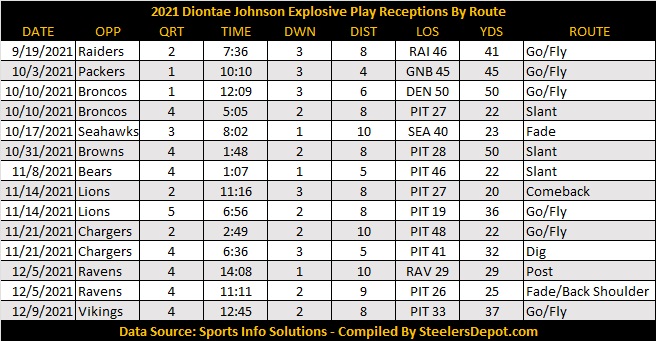 So far this season, Johnson has registered just three explosive plays of 20 yards or longer. Those plays came via fade, comeback, and go/fly routes.

In summation, I believe that there’s nothing really wrong with Johnson this season outside of how he’s being used and more specifically, what routes he’s being targeted on.

We’ll revisit these numbers after the 2022 season is over with to see if anything changed.