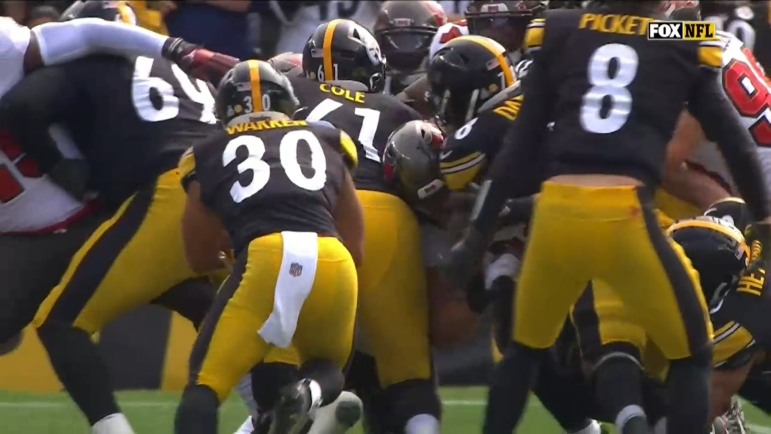 Pittsburgh Steelers undrafted rookie running back Jaylen Warren has gone from camp darling to third down running back and is continuing to get more opportunities. Today on The Mike Tomlin Show streamed on the Steelers YouTube page, head coach Mike Tomlin spoke to Bob Pompeani about Warren’s progression throughout the year.

“Jaylen’s progress has been a topic of discussion in recent weeks, and I’ve been pretty consistent in saying as long as he continues to show growth and development, we’re gonna continue to find ways to be inclusive and utilize him” said Tomlin.

Warren started the season as a backup who did not see the field too often, but as the season has progressed he has seen more and more playing time. Warren got promoted to third down running back in Week Five against the Buffalo Bills and has continued to gain more and more snaps. Part of the reason for Warren’s increase in snaps is how successful he has been when in the game. While being a very good pass blocker, Warren has also ran the ball successfully, averaging five yards per carry.

Although some might say that his numbers are a bit inflated due to runs against light boxes in blowouts such as against the Philadelphia Eagles, his numbers against the New Orleans Saints say otherwise. Warren averaged 4.1 yards per carry against the Saints while running the ball nine times: his highest total of the season.

With Warren continuing to carry the rock well, expect him to keep earning more playing time and spelling Najee Harris a bit more. Harris, in turn, had his best game of the season last Sunday when Warren was able to relieve him and take some of his carries.

While Tomlin has been known to run his lead back into the ground and rarely use a backup, at least for this season it seems that the Steelers work best when their backs can split up the carries a bit. Warren has certainly earned more carries and snaps this season, and if he continues this level of play expect to see him out on the field even more.

For the Steelers to win games this season, they need to get the ball to their dynamic plays. While coming into the season, Warren was not pegged as one of those dynamic guys hsi performance when playing has forced Tomlin to acknowledge him as one.

“He’s [Warren] been dynamic at times with the ball in his hands and it’s no secret we’re gonna work to put the ball in the hands of guys that are consistent playmakers, and he has been that.”

One of those dynamic plays was late in the game on a third and eight which Warren picked up 21 yards to pretty much seal the victory for Pittsburgh. Warren has been the steady hand for Pittsburgh and has also often been called upon on third and short of fourth and short situations due to his tendency to get upfield very quickly. Warren is not the fastest back by any means, but he hits holes quickly which has allowed him to have that nice five yards per carry average.

Warren did not see many carries against the Cincinnati Bengals in Week One, only three, but with him continuing to earn more snaps and carries expect him to to receive a nice amount of handoffs as the Steelers try and sweep their division rivals tomorrow.