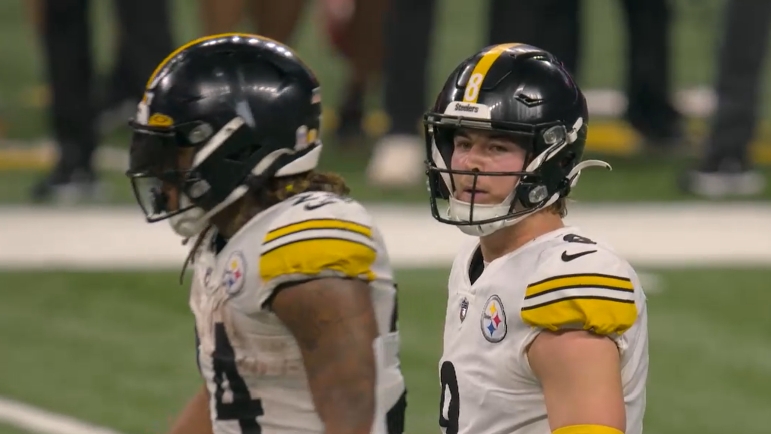 After a half of football was complete Monday Night, it felt like the Steelers were rolling. The defense was on fire, allowing only four first downs and 71 yards in the first half. The offense was far from perfect, but they still were driving the ball and were able to hang 16 points on the board. With how the defense was playing, the feeling was that 16 is likely more than enough to win the game.

It all could be that easy, right?

However, “easy wins” are not what the many that dawn the black and gold every week signed up for when they decided to be a part of Steelers Nation. If it was, they were rudely awakened to the fact that those only come once in a blue moon.

This year, wins of any kind are becoming hard to come by and after halftime in Lucas Oil Stadium, it started to get really ugly before it got better.

Out of the gate, the Steelers’ kickoff team allowed an 89-yard return to start the half. The defense wasn’t able to defend the short field, and only a short 1:56 into the third quarter their lead was cut to just six with the Indianapolis Colts being able to hit paydirt for their first score of the night.

Worry starts to creep in that the team could blow this great start to the game, in a blink of an eye, but the way this defense has been playing, there’s no shot.

That is until the Steelers’ string of second-half three-and-outs reared its ugly head yet again. Carrying over from the Cincinnati Bengals game in Week 11, the Steelers offense has six-straight three-and-outs on drives that ended in the third quarter. A streak that wouldn’t be killed off in this game. The icing on top of realizing that opposing teams are making the necessary adjustments at halftime to counter the offense’s gameplan is hearing a defender scream out, “IT’S THE SAME PLAYS,” just before getting a 3rd and 1 stop.

However, in true Steelers fashion, the offense’s failure to show up in the second half was equaled by the defense. The only thing that kept the Colts’ offense out of the end zone their first three drives of the second half was their own running back, Jonathan Taylor, fumbling a handoff at the one-yard line. A play, that one may assume would be the turning point of any other game, only to be followed up by another Steelers three-and-out and a Colts lead-changing touchdown after that.

It was a total collapse.

While the deficit was a single point, the complete loss of momentum in a game, that once felt dominated by Pittsburgh, was mind-numbing.  Before they even took the field, all hope was lost in this offense to respond after finally losing the lead. The following plays only solidified that hopelessness.

2nd down: Benny Snell up the middle for one.

“Nice, another 2nd and long run.” *Grabs for the Jack Daniels bottle as the Monday Night Football outro music begins to play*

It’s time for the fourth quarter.

There’s a play on an old proverb from ‘The Dark Knight’, Harvey Dent says at a press conference, “The night is darkest before the dawn. And I promise you, the dawn is coming.” I picture quarterback Kenny Pickett saying something similar to his offense in the huddle during the quarter break. Before you could muster up the courage to take that shot of Jack on a worknight, he turned this game around with one play.

Ten yards away from a third-straight three-and-out, Pickett pulled off one of the best plays in his young pro career.

Indianapolis shows 2-high at the snap, but brings a slot blitz, playing cover 1 behind it. The Steelers call a “dagger concept.” Watch below as Pickett calmly goes through his read from one to two, while moving the pocket, and still delivering a dot as he takes a hit to the head. An incredible rep all-around, not to mention a nice catch from his fellow rookie at wide receiver, George Pickens.

The play converted the first down and also picked up an extra 15 yards from a roughing the passer penalty due to the blow to the head. It jumpstarted the offense again and began their march the rest of the 46 yards to the end zone, finished off by a Benny Snell touchdown run on 3rd and Goal.

Seeing that should get you excited about what’s in store for Pickett in black and gold. It’s a big-time play, in a big-time spot. If that ball isn’t completed and the Steelers had to send out the punt team yet again, the morale of that team would have been completely shot, but instead, we all get to bask in the glory that is Kenny Pickett’s first-ever fourth-quarter comeback. It’s okay to live in the moment sometimes, I promise.