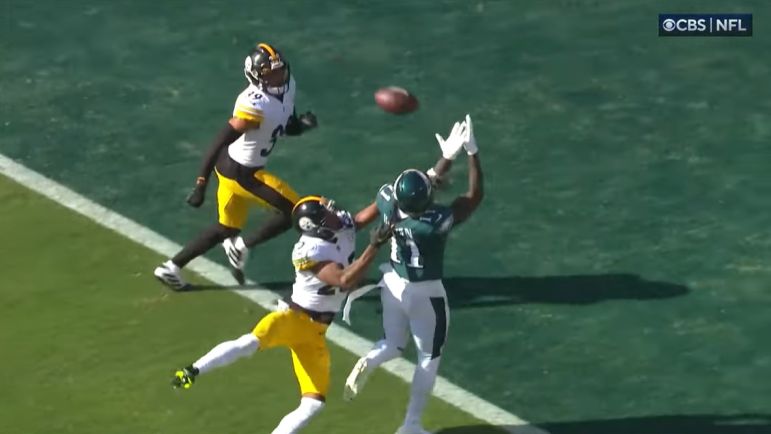 The Philadelphia Eagles fight song told the story of the Pittsburgh Steelers’ first half in Lincoln Financial Field Sunday.

On the road to victory!

On the shoulders of quarterback Jalen Hurts and wide receiver AJ Brown, that’s just what the Eagles did, as they connected for not one but three first-half touchdowns. You never want to write a team off after an opening-drive touchdown, but the Eagles’ opening-drive touchdown was only a sign of things to come for this defense. All three touchdown catches had the same thing in common, defensive backs in positions to make plays and simply not making them.

On the first touchdown, the Eagles are running a crease concept which is essentially an inverted mills concept. The seam by the slot receiver takes the free safety, Minkah Fitzpatrick, opening the middle of the field completely for the dig by the X. Hurts technically makes the wrong throw here. You can see AJ Brown lets up on his route around the 20 because he thinks the ball likely is going to the dig.  He did his job occupying the safety, but Hurts takes the shot anyways and the Steelers simply don’t make him pay. Fitzpatrick misplays is it in the air and sinks too far, allowing for AJ Brown to cut underneath him for the touchdown.

As expected, Fitzpatrick is furious with himself as it should have been in an interception and at worst been an easy breakup.

Here's the video to go along with it: https://t.co/6W0QesY4IF pic.twitter.com/0V3H1kArpM

The Steelers offense was able to answer, battling through numerous presnap penalties, to turn in a touchdown of their own on a 4th down jet sweep pass from Chase Claypool to the forgotten Watt brother, Derek. With the score tied at 7, I’m sure there were plenty of Steelers fans sharing the same excitement as the most hated man in Pittsburgh, Matt Canada. It seems this team always manages to give its fans a glimmer of hope before crushing them.

Hand up, Claypool had me fooled. Great job pulling that off.

Canada is FIRED up. Would love to see his BPM, before and during this play. #Steelers pic.twitter.com/O6uxWrzIbh

This brings us to our “Junior” Turning Point. Immediately following the Steelers’ touchdown drive, the Eagles have a 3rd & 1. The big men up front were able to stop the best QB-sneaking team in the league at their own game. Unfortunately, the Pittsburgh defense didn’t want their offense to have all the fun with presnap penalties, they wanted to get some of their own.

Defensive tackle, Montravius Adams, the man who is the closest to the football, lines up offsides, giving the Eagles an automatic first down. The reason this is my “Junior” Turning Point is I’m not so sure that Philadelphia wouldn’t have tried to run it back again on fourth down. Regardless, it kept the drive alive and six plays later the Eagles were able to put the ball in the end zone, again, a la AJ Brown.

This time Hurts chose to target Ahkello Witherspoon on Brown. Out of the three first-half touchdowns, this was the most forgivable. There’s no defense for the perfect throw and that’s exactly what Hurts delivered here.

Witherspoon isn’t in an awful position. You would like to see him get tighter to Brown’s hip and be able to ride him more to the sideline, but you can tell he’s respecting an in-breaking route. It was a real gut punch of a play coming on 3rd & 8. In past games, the defense had a dam that eventually broke once the offense continued to stumble. This week, the dam was never built.

Fast forwarding through two more Steelers three-and-outs, we’ve come to our final turning point, or in this week’s article, it’s more like the final nail in the coffin.

I have to give a ton of credit to the Eagles’ play design here because it works to perfection. It’s a fake bubble screen that gets the whole right side to bite, giving Brown a step on Witherspoon. Adding to that, the post route from the slot gets Fitzpatrick to hesitate just enough on it to keep him from being able to make it over to the top of the go-ball on the outside.

Take notice, Pittsburgh fans, this is what great play design matched with great execution looks like. It’s something this city has long been deprived of on the offensive side of the ball. Witherspoon, again, is still right there to make the play and simply doesn’t have the play strength to get the ball out. It’s something that’s plagued him all year.

This gave the Eagles a decisive two-score lead and 21 points on the board. With Pittsburgh’s offense not being able to score over 20 points all season, it was hard to assume that it wouldn’t be enough for the undefeated Eagles to hold on to this football game. Sure enough, it turned into another disappointing blowout loss.

While Rookie quarterback Kenny Pickett was speaking more to the offensive’s output he may have said it best as it relates to the Steelers as a collective, “It’s insane to keep doing the same thing over and over again and expect something different. We’ve been having these problems all year. That has to get changed.”

If things don’t change in a hurry, we’ll be seeing a whole lot more of this through in the second half of the season.