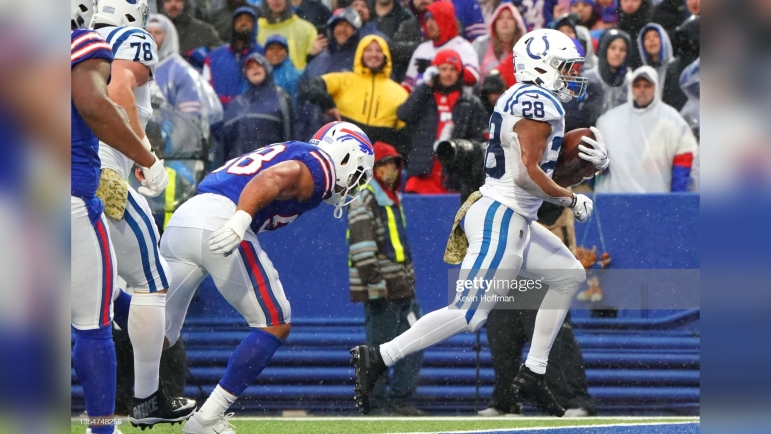 The Indianapolis Colts have arguably a top five running back in Jonathan Taylor, and with a former offensive lineman in Jeff Saturday as their head coach, the Pittsburgh Steelers have an emphasis on stopping the run on Monday night.

On The Mike Tomlin Show streamed on the Steelers YouTube page, Steelers’ head coach Mike Tomlin talked with Bob Pompeani about stopping Taylor this week and how that is going to be job number one for the Steelers defense.

“I’m really focusing on the blocker game since Saturday has taken over him with being a former offensive lineman” Tomlin told Pompeani. “I noted there’s gonna be a commitment to establishing the run and winning the line of scrimmage. He [Taylor] ran for 147 [yards] two weeks ago against the Raiders, and really that’s why they won that game. There was a commitment to the run against Philadelphia, although I think he only ran for 84 yards he had 20 plus carries, and so we’re anticipating a commitment to the run.”

Since Saturday was hired by the Colts, their run game has improved. In their nine games before Saturday was hired they averaged 104.6 yards per game, which places them bottom ten in the league. In the two games Saturday has coached, the Colts have averaged 153 yards per game on the ground which would be fourth best in the NFL.
Despite a poor year in stopping the run last year for Pittsburgh, they have had a good bounce back year in that department. This year the Steelers are allowing only 103.4 yards per game which is seventh best in the league. Last year they were dead last, allowing 146.1 yards per game.

However, on Monday night a new task approaches when trying to stop the dynamic Taylor. Despite it being a bad year for his standards, the Colts star is averaging an impressive 4.6 yards per carry. The Steelers defense allows four per carry which is fifth best in the league, so they are certainly capable of stopping him.

What helps Pittsburgh in the run stopping department is that their two starting EDGE rushers, T.J. Watt and Alex Highsmith, are very good run stoppers. Cam Heyward and Larry Ogunjobi are also good at stopping the run as well, leaving no area of weakness on the defensive line for teams to attack running the ball. When Watt was out with injury, teams would run to his side, but with him back there is now no weak point on the defensive line.

Monday night will be a strength v strength battle when the Steelers are on defense. Whoever comes out on top in the run game will likely win, so it is vital that the Steelers do not let Taylor beat them.